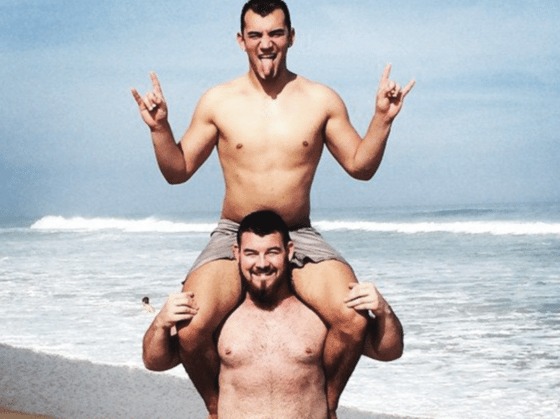 The second strongest man on the planet has just broken up with his boyfriend.

26-year-old Rob Kearney (a.k.a. the “World’s Strongest Gay”) was the first openly gay competitor to take part in professional or international strongmen competitions in 2014.

He and his boyfriend, Joey Aleixo, have been together nearly four years and were known for posting cute photos together on social media.

“Behind every strongman is an even stronger man.” Thank you @jaleixo for your continued support, your undying love and your amazing ability to annoy the shit out of me and somehow make me love you even more.

“This will certainly be the hardest thing I’ve written, but after a lot of questions, this is easier on me,” Kearney writes on Facebook. “Joey and I are no longer together.”

Without going into too much detail, Kearney says he made some sort of “mistake” that seems to be irreparable.

“We have had our differences,” he writes. “I made a mistake and things came to a point where, right now, they can’t be fixed if we are together.”

Thanks for always having my back ??

Kearney adds: “We are taking this time to focus on ourselves, become better people and then hopefully rekindle our relationship.”

He concludes by saying he and Joey are still friends, but that, for the moment, they are better apart.

“We still love each other, he is still my best friend,” he writes, “but sometimes what’s best for a relationship in the long run, is some time apart.”

Not sure what it is, but nothing makes me happier than seeing his smile and hearing his laugh ???

Kearney become an inspirational figure to many in the macho weight lifting scene when he came out in 2014 in a short by sweet Facebook post.

“My #mcm goes to this guy, my boyfriend, Joey Aleixo!,” he announced back then.

Here’s hoping these two can find a way to work out their differences.