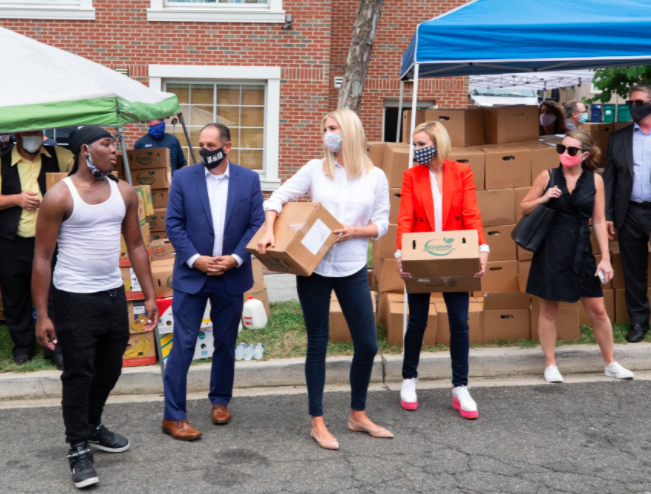 Hey, remember Ivanka Trump‘s pet project where she gave out food to hungry people during the pandemic? Well, a new report released by the House Select Subcommittee on the Coronavirus Crisis finds that the whole thing was basically just a poorly run PR stunt that awarded millions and millions (and millions) of dollars to totally unqualified contractors for the sole purpose of boosting Donald Trump‘s reelection chances.

The former first daughter loved to take credit for the Farmers to Families Food Box program, which was created by the Department of Agriculture as a way of donating leftover food that otherwise would have gone to waste to starving families who had lost everything because of COVID-19.

The program was unveiled in May 2020 by Ivanka herself, who said, “I’m not shy about asking people to step up to the plate.” And the boxes included fresh produce, milk, dairy, and cooked meats. Oh, and a signed letter from Donald Trump himself.

Ivanka would often post photos and videos of herself giving out boxes of food in church parking lots and bragging about how altruistic she was.

But, like almost everything else involving the Trumps, the whole thing was just a bunch of smoke and mirrors.

After a nearly year-long investigation, the committee says that the program was a complete shitshow behind the scenes, and that the Trump administration didn’t properly screen contractors, and that Ivanka herself came up with the letter idea because she thought it would help get her dad reelected.

So, how bad was it exactly?

Bad enough that a company called CRE8AD8 LLC (pronounced “Create a Date”) received a $39 million contract despite the fact that it’s a wedding planning firm that specializes in “putting tchotchkes in a bag” and not feeding hungry people.

When asked for comment, the company’s CEO issued a defensive response, saying, “We delivered far more boxes/pounds than many other contractors and as a for-profit company, we’re allowed to make a profit.”

The report also found that an avocado grower was awarded a $40 million contract despite scribbling “I don’t have any” under the references portion of his application. (The contract was later canceled. Thank god.)

Congressional investigators also found that Ivanka was the mastermind behind the signed letter from her dad included in each and every box.

The USDA told contractors that including the letter was mandatory even though food bank operators expressed concern that it would make the program appear political when it was supposed to be about feeding the malnourished during a pandemic.

On top of all that, Donald Trump ordered then-Secretary of Agriculture Sonny Perdue to talk about the program at the Republican National Convention in August 2020, which a federal ethics office later determined was a violation of federal law prohibiting officials from using their office for campaign purposes.

In a statement, committee chair Rep. James Clyburn said the mismanagement of the program, which President Biden ended in May, is yet another example of the previous administration’s multitude of failures.

Neither Ivanka nor her dad have commented on the committee’s findings.