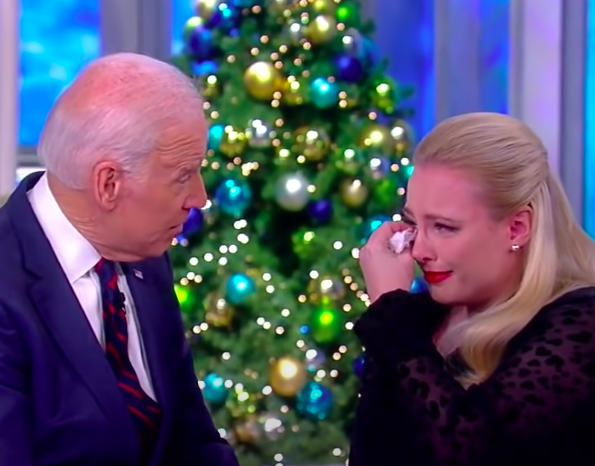 Despite her extreme privilege, Meghan McCain is clearly a deeply damaged individual and her latest op-ed in The Daily Mail proves it.

The rambling think piece, which was published yesterday, is all about how much she loathes–and we mean loathes–Joe Biden, who gave a eulogy at her father’s funeral, without offering any constructive criticisms, substantive ideas, or alternative solutions to his policies. In short, it’s just a hate fest.

We will now spend the same amount of time summarizing the op-ed as McCain spent writing it, which is approximately 15 seconds…

Basically, she spends the entire time bitching about how President Biden, who she “once considered a friend and confidante”, has become a “cantankerous” old man who is “out of touch with reality.” She also calls him “feckless,” “unreliable,” “stubborn,” and says he surrounds himself with “the worst type of corrupt bureaucrats” and “idiotic sycophants,” and that he’s divisive and distrustful and might be abusing his power and, oh yeah, Fauci sucks, and Jimmy Carter too, and God Bless America, and the media is just garbage, and blah, blah, blah, blah, blah.

OK, we think you get the point.

McCain, who has known Biden her entire life and once relied on him for support after her father’s cancer diagnosis and eventual death, shared her work on Twitter yesterday.

Check out my very first column for ?@DailyMail?! https://t.co/mOouL47GUf

I’m not even going to waste my time on this crap. What a loyal friend you are. 🤦🏻‍♀️

He was so kind to you and your family. You were crying in his arms, and then you continue to bash him every opportunity

Why is anyone paying her for opinion columns? Being related to someone is not a credential.

Its unfortunate you write this about the man that was there to console you about your father. pic.twitter.com/kOgPLUa1eg

Biden on his worse day is better than Trump on his best day.

Let me get it straight. You no longer consider him a “friend and confidante” when you don’t care for his policies?? What is your definition of a friend? Someone there for your dad’s illness? And then he’s of no use?

Wow! Can you imagine having Meghan as a friend as the Biden’s were to her and her dad? Watch your back. She doesn’t care, just like Melania.

Had you stuck with facts and simply addressed policy, your words would be impactful. Choosing to cash in on your personal relationship with Joe Biden in order to attack him personally, however, reflects poorly on you. Didn’t you once claim to dislike sensational journalism?

This is how you use your family name?

Here’s a video of McCain and Biden during the better, more compassionate days of their relationship…