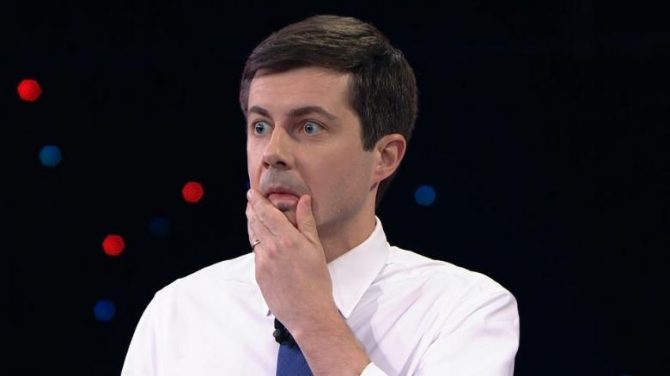 Pete Buttigieg headlined a brunch for the LGBTQ Victory Fund in Washington D.C. on Sunday where he talked about meeting his husband, Chasten, on a dating app.

In his inspiring and relatable 20-minute speech, Buttigieg said he first spotted Chasten while scrolling through profiles online, but joked it was “possibly not the app you’re thinking of.”

Well, Jacob Bacharach over at The Outline certainly didn’t think so! In a rambling new op-ed titled Why Pete Buttigieg Is Bad For The Gays, he writes:

The joke is a good one for a largely gay crowd. It says that Mayor Pete knows about Grindr, just like you. He’s no prude! But it also lets him implicitly disapprove of the more explicitly sexual nature of Grindr. And there’s a constituency there. Among that certain kind of gay, saying “I’m not on Grindr” is the cultural equivalent of the equally snooty, “I don’t watch TV.”

Bacharach goes on to accuse Buttigieg of selling himself to Americans as “a type of unthreatening, socially acceptable, vaguely conservative gay identity.”

“He wants to define himself as a very specific kind of family man,” Bacharach opines. “A veteran, a Christian, and a fierce, married monogamist, in stark moral opposition to the gross, philandering current occupant of the White House. This is probably good politics. I’m not so sure it’s good for the gays.”

Bacharach then gives a laundry list of reasons, some more coherent than others, as to why he feels this way. What it ultimately boils down to is this: He believe Buttigieg’s squeaky clean image turns gay people “into just another boring, bourgeois constituency of the vacuous center of American politics.”

And this, to Bacharach, is bad. Very, very bad. Because god forbid LGBTQ people ever be viewed as anything other than magical rainbow unicorns.

Naturally, Twitter has had a lot to say about Bacharach’s op-ed…

Going to ask the harasser who called me a faggot on the street the other week whether or not he thinks Pete Buttigieg is bad for the gays!

It’s really important for the electorate that Pete Buttigieg gives a detailed account of every grindr hook-up he has had.

I don’t understand this article. @PeteButtigieg is bad for gay people, because he made a joke about Grindr? Heteronormativity and monogamy is kind of boring, sure, but it’s stupid to say that makes him less gay or hinders the advancement of LGBT people. https://t.co/K7FgzO55YA

We are fundamentally in two different Americas: the one where Pete Buttigieg isn’t gay enough because he didn’t meet his husband on Grindr, and the one where in 29 states you can still be fired for being gay.

Caitlyn Jenner is bad for LGBT Americans.
Pete #Buttigieg is not. And a major publication calling him “bad for the gays,” is wildly inappropriate.

There is no “correct” way to be queer in the public eye.

Seeing lots of people dragging that “Why Pete Buttigieg is bad for gays” article, so why not throw my opinion into the mix.

My qualm about Pete Buttigieg is that as a gay person of color he’s a reminder that you have to be white first. Of course white gays feel represented.

Critique Pete Buttigieg’s politics all you want, but calling him “bad for the gays” in a headline is the most click-thirsty, irresponsible bullshit possible.

Gay Bernie supporter who is remarkably similar to Pete Buttigieg in almost every way just happens to think Buttigieg is “bad for gays” https://t.co/QeARvwkE5C

What’s “bad for the gays” is letting your narcissism and hunger for hollow drama get in the way of making a good point. But it is also the cornerstone of our culture, something Pete Buttigieg would know NOTHING about…

Last month, Christina Cauterucci at Slate faced similar backlash when she published an op-ed titled Is Pete Buttigieg Just Another White Male Candidate, or Does His Gayness Count as Diversity?

In it, she questioned whether the 2020 hopeful, who spent the first several years his military career serving under DADT, had ever actually “faced setbacks or barriers to success because he’s gay.”

“A gay man who conforms to a critical mass of gendered expectations can move through life without his sexuality attending every interaction, even after he comes out,” Cauterucci wrote. “Buttigieg, for instance, would register on only the most finely tuned gaydar.”

It sounds like Bacharach and Cauterucci should get together. They’d probably have lots to talk about.

Related: Writer questions if Pete Buttigieg is “gay enough” to be the first gay president. Cue the outrage.