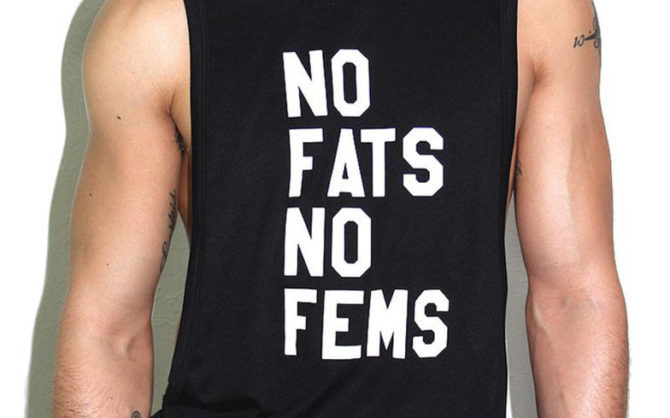 “Masc4Masc.” Is it a sign of internalized homophobia or not? In a new think piece published by  Huffington Post, writer Jeremy Helligar offers his two cents on the matter.

Which leads us to the dreaded “Masc4Masc.”

A recent study published in Computers in Humans Behavior titled “Masculine Guys Online” surveyed 144 gay and bisexual men about their online dating habits and found that the majority of them viewed guys who write things like “Masc4Masc as “significantly less intelligent, significantly less sexually confident, and significantly less dateable than their counterparts.”

“Masc4Masc” may be both misguided and dismissive of anyone who swings too close to the crusty gay stereotype, but is it indicative of self-hating internalized homophobia as its critics often suggest? By publicly identifying as “masculine” and seeking the same, is one somehow rejecting his own gayness?

Related: Are Modern Gay Men Obsessed With ‘Seeming Straight’? This Guy Thinks So.

“Masculine is as legitimate a gay quality as feminine,” he argues. “In fact, it’s been a cornerstone of gay culture for decades.”

In the post-Stonewall 1970s, Tom of Finland-style masculinity practically defined gay culture, whether it was aspirational, celebratory, or closer to parody. Chest hair and handlebar mustaches were hot, and The Village People dominated the disco soundtrack. Remember the most successful gay pop act of the era? The music was unabashedly gay while the members represented some of the most masculine male identities: cop, cowboy, construction worker, military man, leather-clad biker, etc.

Being into guys like this, Helligar says, is different from internalized homophobia or self-hatred.

“We spend so much time and effort rallying against gay stereotypes,” he writes, “but aren’t we only reinforcing them when we suggest that to desire masculine men is to somehow be anti-gay?”

Related: Why writing “no fems” is actually killing your dating game

“Masc4Masc” might not be sending the best message to gay guys who don’t qualify, but dismissing “Masc4Masc” as being anti-gay isn’t sending a particularly healthy message to gay guys who do qualify. We’re all men, and we’re all gay. Equating gay with feminine or flamboyant or camp does as much of a disservice to gay people as rejecting those qualities. It’s like expecting a black person to “act hip hop.”

After all, Helligar writes, “there’s no one way to be gay.”

What do you think? Does Helligar have a point? Share your perspectives in the comments below…