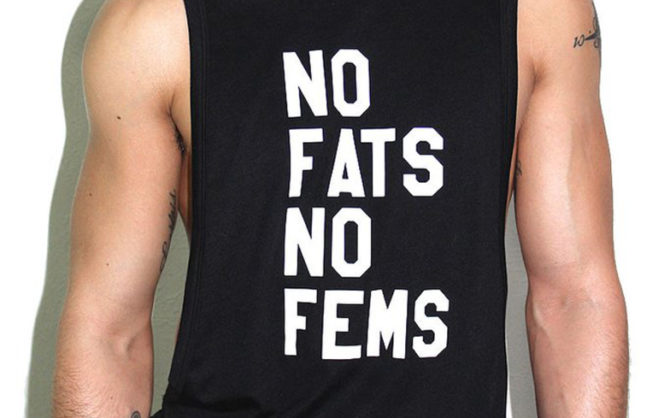 Does your dating profile say anything along the lines of “no fems” or “masc4masc”? If so, you’re actually hurting your chances of getting laid.

In a new column, Joe Stone points to a recent study published in Computers in Humans Behavior titled “Masculine Guys Online.” The study surveyed 144 gay and bisexual men about their online dating habits and found that the majority of them viewed guys who write things like “masc 4 masc,” “no fems,” or “real men only” as “significantly less intelligent, significantly less sexually confident, and significantly less dateable than their counterparts.”

“Well, duh,” Stone writes. “This is the least surprising experiment since the one which found that people who post inspirational memes have lower levels of intelligence (have you ever noticed how it’s never your successful or happy friends posting whimsical nonsense about how to achieve success and happiness?).”

Related: Are Modern Gay Men Obsessed With ‘Seeming Straight’? This Guy Thinks So.

He continues: “The proliferation of gay dating profiles that feature a headless torso alongside a description of ‘no fats, no Asians, no fems’ is one the most depressing aspects of modern gay culture. For me, it’s doubly troubling–first because people are so plainly ignorant, and second because they seem comfortable advertising that ignorance so freely.”

Of course, none of this is really new. Others have been pontificating over the whole “masc4masc” thing for a while now.

“My theory is simple,” Alexander wrote. “These men want to overcompensate for their queerness, because on some level, they see their queerness as negative and that their sexual orientation makes them a ‘sissy’ by default.”

Related: This “fabulous husky gaysian” comedian is so over your white supremacy

He added: “Strangely enough, being seen as ‘straight acting’ is something desired by a large demographic of gay men, hoping to embody these traits of the heterosexual male in their gay lifestyle.”

And then there was this meme that began circulating on social media last month:

But there is a plus side to all this, Stone says.

“At least men with Masc4Masc profiles let us know straight off the bat that they probably aren’t evolved enough to deserve our time,” he writes. “John Waters famously said, ‘If you go home with somebody, and they don’t have books, don’t fuck ’em.'”

Related: Jack’d Has The Perfect Response To “No Fats No Fems”

He concludes, “Perhaps if we adopted the same policy with the masc-only brigade it would encourage some much-needed introspection. At the very least it will help them achieve their aim, since surely never having sex with another man is the finale frontier in being truly ‘straight-acting.'”