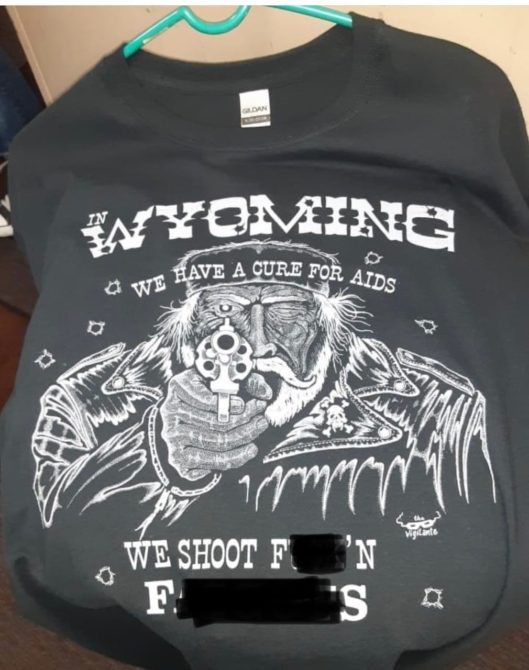 A bar in Wyoming that caters to a motorcycle crowd has become the subject of national scrutiny over the sale of homophobic t-shirts. The apparel promotes the murder of gay people as a “cure for AIDS.”

Photos of the shirts, sold at The Eagle’s Nest, in Cheyenne, Wyoming, went viral on the internet for their homophobic and violent language. The shirt in question features a man pointing a gun under the caption “In Wyoming, we have a cure for AIDS. We shoot f*ck’n f*ggots.”

The photos emerged with the LGBTQ rights organization Equality Wyoming, which first declined to name the bar out of fear of a spike in t-shirt sales. Metro Weekly also reports that the group instead called for donations to AIDS-related charities rather than protests at the location.

Related: Wyoming voters will soon decide whether they prefer Liz Cheney or a guy who impregnated a 14-year-old

“We are sad to say that we failed to convince a local bar to pull these shirts from circulation. We hoped that they would choose to stop selling them when they realized the harm it did to the LGBTQ community and those living with AIDS,” Wyoming Equality said in a Facebook post. “…It is a sad day. Wyoming Equality understands that…this sucks.”

Sara Burlingame, the executive director of Wyoming Equality, also took to Facebook to claim she had lobbied the bar to stop selling the shirts more than once, though the owner refused.

When reached for comment, Eagle’s Nest owner Ray Bereziuk claimed the shirts had sold out, and that the bar would no longer sell them. Bereziuk further told The Cheyanne Post that he is “in the bar business, not the apparel business.”

The blowback over the shirts comes as LGBTQ activists in Wyoming continue to push for stronger protections for queer people against acts of violence. Last month, the state’s Joint Judiciary Committee voted to expand hate crime protections for LGBTQ people. Dale Steenbergen, the president and CEO of the Greater Cheyenne Chamber of Commerce, also claimed that the state is missing out on considerable tourist and business funds because of its perceived hostility to queer individuals.