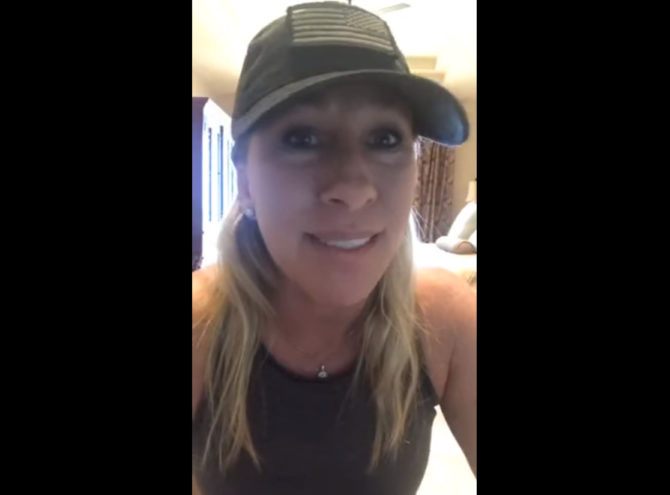 QAnon-loving conspiracy theorist and freshman GOP congresswoman Marjorie Taylor Greene has invited even more criticism this week, this time over a resurfaced video from 2019. In it, Greene tells viewers to prepare for violence at a protest at the US Capitol.

The video in question dates from 2019 and is not directly related to the Capitol insurrection of January 6. Still, given Taylor Greene’s comments regarding that riot, the new video carries an eerie, disquieting onus.

Salon uncovered the video, apparently recorded in February 2019, which shows Taylor Greene urging protestors to show up at the Capitol Building for a protest on February 23 of that year. Taylor Greene apparently helped organize the event, a “Fund the Wall” rally aimed at curbing immigration. She also tells her followers to prepare for violence against a “tyrannical” government.

“All of us together, when we rise up, we can end all of this. We can end it,” Taylor Greene said in the 90-minute video, which was uploaded to Twitter by user @zedster. “We can do it peacefully. We can. I hope we don’t have to do it the other way. I hope not. But we should feel like we will if we have to. Because we are the American people.”

holy s**t, this is Greene talking about a 1/23/20 protest she helped organize and her want to have the crowd invade the capitol

wonder what the cross over was between those planning the 1/23/20 protest and the 1/6/2021 protest pic.twitter.com/6DLVBbJvoA

“They are nothing, and they should fear us. … They should be cowering in fear,” Taylor Greene says. “And you know what, if you show up in big numbers on Feb. 23, oh I promise you, I promise you, they’ll be struck with fear on the inside.”

Over the course of the video, Taylor Greene also makes references to “communist traitors and Islamist lovers,” an “out-of-control, tyrannical, insane” federal government, and warns leaders that they “should fear us.”

The video comes at a time of ongoing scrutiny over Marjorie Taylor Greene’s actions prior to the January 6 Capitol insurrection, as well as her past statements calling for violence against elected officials. Earlier this week, we reported that Taylor Greene is scrambling to delete social media activity between 2018 and 2019. Senate Minority Leader Mitch McConnell also made a thinly-veiled jab at Taylor Greene and her fellow QAnon conspiracy theorists, referring to them as “cancer” on the Republican Party.