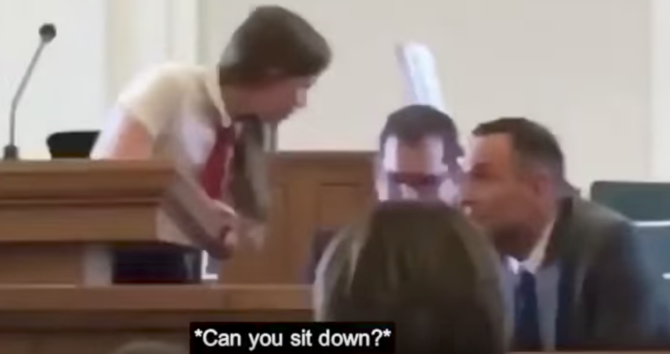 We’re not exactly sure what Jesus would have done in this situation, but we’re 99.99% sure it wouldn’t have been this.

12-year-old Savannah is about as brave as they come. During her Mormon ward’s monthly Fast and Testimony meeting, she decided to get up in front of everybody and talk about what God means to her. That’s not an easy thing for any preteen to do, but it was even more challenging for Savannah.

She took the mic and told her community about her “heavenly parents” who helped make her into the girl she is. They gave her brown eyes; they gave her freckles; they made her gay.

“I believe that God wants us to treat each other with kindness, even if people are different,” she said after coming out.

A hushed chatter broke out among the audience of pious elders, who supposedly had Savannah’s best interests at heart. Eventually one official made an executive decision — cut the courageous girl’s mic, and tell her to sit down and leave the stage.

In an interview with the podcast I Like to Look for Rainbows, Savannah opened up about this incredible moment:

Why were you sad?

Savannah: I was sad because I wanted to finish it, and I felt like what I was saying should’ve been heard by everybody else.

And why were you happy?

Savannah: I was happy because I could finally get out to everyone, and show that gays aren’t weirdos.

Savannah seems to be pretty comfortable with herself, and that is truly amazing given the hypocrisy she is steeped in. But the incident is a stark reminder that kids are still being subjected to psychological abuse in the name of God.

Related: This Christian Facebook page banned rainbow emojis. They should have known what would happen next.

We hope young people out there see Savannah’s daring bravery and are inspired by it.