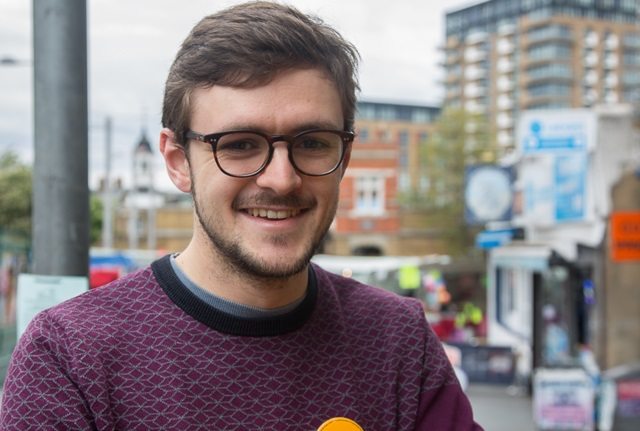 Chris Adams is a young Liberal Democrat and prospective parliamentary candidate from London. He’s also a Christian. And gay. In a deeply personal new op-ed published by Pink News, he talks about the struggles he faced when reconciling his faith with his sexuality.

“Prior to coming out I had always been taught and accepted … that acting on gay sexual desire was wrong,” Adams writes.

Related: Christian college students are taking a stand against antigay bigotry on campus

Because of this, he says, he married a woman when he was in his mid-20s. Spoiler alert: It didn’t work out.

“I convinced myself that I was bisexual, because that was OK: I could still get married and have kids that way.”

Turns out, it wasn’t OK. The marriage was miserable. Adams was unhappy the entire time, feeling trapped, guilty, and even suicidal. Not to mention, he put his wife “through hell.”

“She didn’t deserve what I put her through,” he reflects.

Eventually, he decided enough was enough. About two years ago, he came out to his wife and his church.

My decision to leave was not taken very well by my church. My pastor rang me and said I couldn’t be a Christian if I was doing this. Friends who had previously said I could crash on their sofa any time of day or night suddenly said they had no time for me. I’m just incredibly grateful for the small group of friends (some Christians but unrelated to my church) who rallied round me to support me. I know that having been rejected by my church, I couldn’t have survived this without them.

As a result, Adams say, he suffered extreme “turmoil.”

“It was an identity crisis,” he says. “I felt as though I had two incompatible identities: neither of which I could deny or give up. … My faith is an integral part of my identity: as deeply personal and unchangeable in nature as my sexuality.”

Today, Adams is in a much better place. It took some time, but he has learned that is is possible to be gay and Christian, despite what some religious extremists might say.

“I know God loves me just as I am,” he writes. “God loves me for who I am. He accepts me and cherishes me. I have known that for each of the last 13 years. Nothing and no-one is going to separate me from the love of God.”

And to anyone who still doesn’t believe him, Adams has this to say:

So let me be honest with my fellow Christians, and all those who would dare to judge me for who I am: God is my judge, not you. You have no right. Take the friggin’ log out of your own eye before you start pointing at the speck in mine. Read your Bible and actually try to live by it instead of judging me and making moral declarations about issues that frankly have nothing to do with you. And if you decide to start making those pronouncements, have the guts to say what you really believe: that you believe gay people to be defective and inherently sinful because of the way they are. At least then we can call it the hate crime that it is.

Hop over to Pink News to see Adams’ piece in its entirety. It is definitely worth the read!