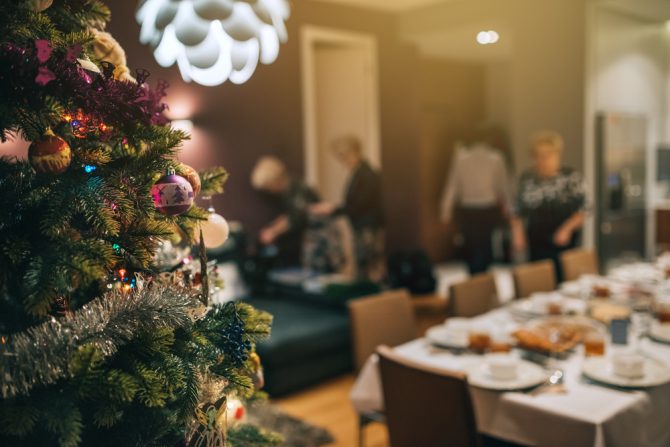 It’s the end of another year. You’re psyched that work has slowed down, and you’re about to have a nice stretch of time off, but there’s still that deep dark pit in your stomach because… you’re going home for the holidays.

It can sometimes be stressful and overwhelming to return to the place that originally shaped us. For many of my clients, it took moving away and forming their own lives or families of choice to heal from the wounds of growing up LGBTQ in well-meaning but oppressive environments, before marriage equality was the law of the land, and when the only gay characters on TV were stereotypical clichés.

Whether you have a gun-wielding Trump-loving brother, a wine-obsessed over-bearing mother, a subtly disapproving father, or an aunt who asks every year, “But whyyyyy are you STILL single?,” there may be times when you just want to go extra hard on the rum-influed eggnog (even if, at the end of the day, you still love them).

It can helpful to have a few ideas in mind to ease your return to the nest, and keep yourself feeling if not jolly at least sane–or as sane as possible–during the “most wonderful time of the year.”

Sometimes when you go home, it can feel like you’re back to being the child you once were in the family. But you’re not that kid anymore, and you can do things on your own terms. You don’t have to completely enmesh yourself in the old ways. You’re a different person now, and it’s okay to sometimes request a little space and freedom to help remind yourself (and them) of that fact.

You may consider renting your own car or staying in a nearby hotel, even though your mom can’t possibly understand why you wouldn’t want to sleep in your old bunk bed with rusty springs, with your husband on the top bunk. Having the freedom to come and go as you please is key, as sometimes the only way to cool down and feel sane again is a long drive with the window down, or a trip to the local gay bar you used to sneak into with a fake ID.

Family members all have their own motives, and they may try to push you to do things you’re not up for–like, say, attending midnight mass–or go for lengths of time that take you past your limits–like participating in an eight-hour holiday movie marathon. It’s important to be clear on boundaries before you enter the vortex, whether that’s stating up front how many nights you’re staying, or getting up and heading out after you’ve endured two hours of political debate over Pecan pie.

You can be assertive without being aggressive by simply stating what you need as a fact. Make sure not to be unclear or wishy-washy, as that can leave an opening that might potentially unravel your agenda. Remember, you’re an adult now, and you get to make all your own decisions without feeling obligation or guilt.

Now, you may be thinking, “But isn’t it selfish to care about myself first without making my poor mom happy on Christmas?” To that I say, remember what that cute flight attendant said on the plane ride there: “Put on your own oxygen mask first before helping another person.”

Remove yourself when necessary

If you’re feeling really activated or triggered, this is a good old standby survival tool. Simply remove yourself, go for a walk around the block, and as you’re doing it, take nice deep breaths and count them.

There’s something soothing about simple mental tasks, as they distract you from triggering thoughts and help ground you back to the present moment. It’s rare that a walk around the neighborhood with some deep breaths won’t leave you feeling even the slightest bit calmer upon your return.

You can also use this time away to reach out for support. Whether it’s your boyfriend or girlfriend, or just a buddy back home on the phone, plugging into your “real” life can remind you of who you are now: strong, capable, and unphased by the magnetic pull into the unhealthy family dynamics.

Going home for the holidays is no easy feat, but if you take care of yourself through careful planning, asserting boundaries, and an independent mindset, you can survive.

Don’t forget, you aren’t alone. As Ellen Griswold famously said in the holiday classic, “I don’t know what to say, except it’s Christmas, and we’re all in misery.”