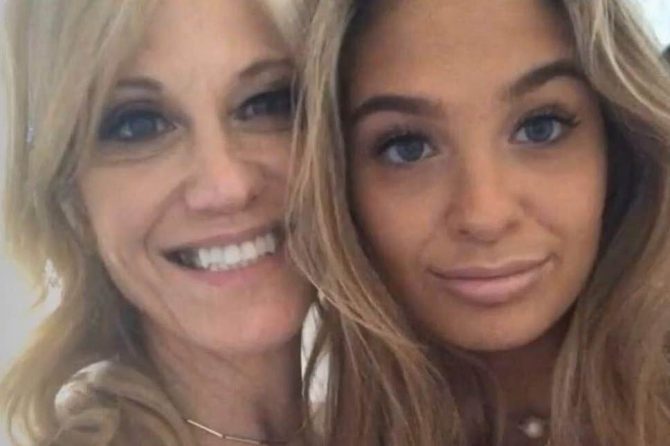 In an amazing moment captured on TikTok, Claudia Conway, daughter of former Trump advisor Kellyanne Conway, has captured an intense argument between mother and daughter over the latter’s COVID-19 diagnosis.

Claudia Conway also announced she had contracted COVID-19, presumably from her mother. Now the social media star and anti-Trump critic has posted an exchange to TikTok showing her mother raging over Claudia’s comments on the situation.

“You’ve caused so much disruption,” Kellyanne says in the clip. “You’ve lied about your f*cking mother about COVID? About COVID!?,” she screams.

“Mom, it’s how I interpreted it,” Claudia contends.

“You’re taping me again?” Kellyanne screeches before the clip cuts to black.

In another exchange taped shortly thereafter, the argument continues. (We’re guessing that Claudia must be on her phone all the time, otherwise, Kellyanne should realize she’s being taped.)

“Yeah, you said it was negative. So I spent the day with you,” Claudia says.

In a third post, Claudia adds a caption as a point of clarification: “Little clarification from my previous posts,” she writes. “My mother claims that she did not lie to me. She had three tests done, first negative, second two positive. We were not in communication. I misinterpreted it.”

We have to guess that Claudia & Kellyanne probably didn’t wear masks during their mother-daughter day together.

My daughter, Claudia, is beautiful & brilliant. She has access to top doctors & health care & lives comfortably

Like all of you, she speculates on social media

We have COVID, but it’s clear who’s really sick

Kellyanne later followed up, tweeting an explanation of her own. “My daughter, Claudia, is beautiful & brilliant,” she tweeted. “She has access to top doctors & health care & lives comfortably. Like all of you, she speculates on social media. Yet she’s 15. You are adults. We have COVID, but it’s clear who’s really sick.”