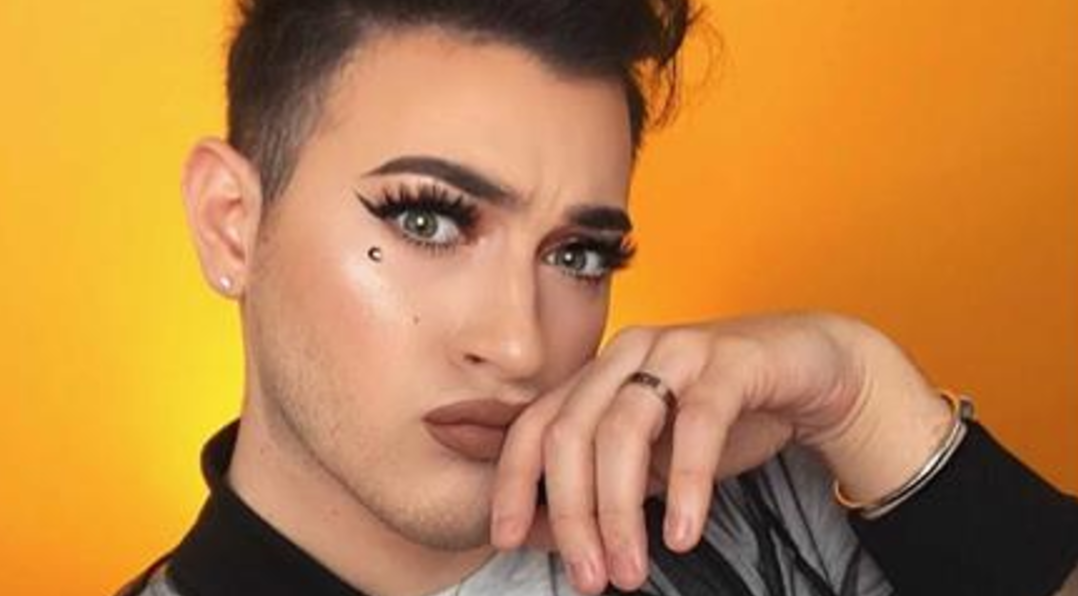 UPDATE: After we published this article, The BCBA Community Center deleted their original Facebook post and exchanged it with this one:

“Oh boy…seems as though the The Radical Homosexual Trolls have gotten a hold of the BCBA Community Sports Training Center Facebook Page…funny how the so called “Tolerant Left” is only tolerant of those who accept their alternative life styles. BCBA stands behind its STRONG belief that boys are boys and girls are girls. We pride ourselves on our ability to help this new generation of misguided snowflakes, become strong self reliant ICEBERGS! For those with boys who are in need of strong MALE role models, our Volunteer Staff of Police, Veterans and Sport Enthusiasts are here for you. Everyone else, we suggest you look to those organizations that embrace your ways and beliefs. It’s that simple.”

Well, this is grim. An anonymous tipster has brought our attention to a transphobic post added to the Facebook page of the BCBA Community Sports Training Center, a Long Island boxing gym aimed at youths that claims its “simple” mission is to:

“serve our community with a facility that is safe, clean and provides a positive environment where young people can come and feel a sense of belonging.”

That is, unless those kids happen to be transgender or gender non-confroming, in which case they’ll be subjected to messages like this (since the business deleted the Facebook message, this is a screenshot of what it looked like): 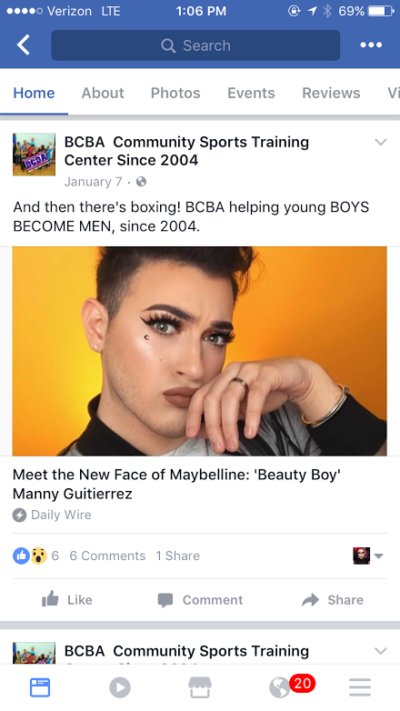 As if that wasn’t grotesque enough, the subject matter of BCBA’s January share was met with gleeful derision by group members, who took aim at Maybelline model Manny Guitierrez and the gay and transgender community as a whole.

Just in case the meaning of the original message appears somewhat ambiguous to you, BCBA makes their position abundantly clear in a followup comment.

Asked by group member Alex Russo, “What the actual crap is that?,” the administrator for BCBA’s Facebook group (who we’ve been told is Director and Head Boxing Couch Ray Bettinelli) chimes in with:

Here’s a screencap of that convo, in case the post is removed (which it was): 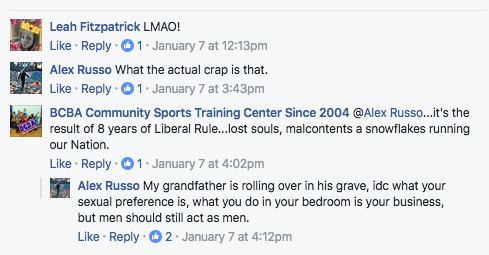 To her credit, group member Donna Morrison Zittel expresses her disappointment and dismay at the boxing group’s attitude, writing:

“Wow, I was just about to ask about Nerf wars. I think you lost my business. You are a business right? I think you should stick to what you know and not knocking other people’s choices. “MEN” come in all shapes, sizes, and forms. Welcome to 2017. My Daughter is gender non conforming, meaning she does not identify as a girl but currently as a boy even though we say ‘she.’ She was born this way and is an amazing soul. I was so excited you were moving to Lindenhurst and having my kids enjoy the facility but now I don’t feel she would be safe there. Really disappointed.”

As our tipster writes, “And this from a business that prides itself in anti-bullying and surrounds itself with children.”

As I said, this business promotes itself as teaching anti-bullying.

However, this picture not only directly bullies an entire group of people, but promotes the direct abuse and shaming of transgender and gay people.

Although they don’t appear to have a Yelp page, you can visit BCBA’s official website or their Facebook group and let them know that you find their anti-transgender messaging wholly unacceptable, especially for a youth group.