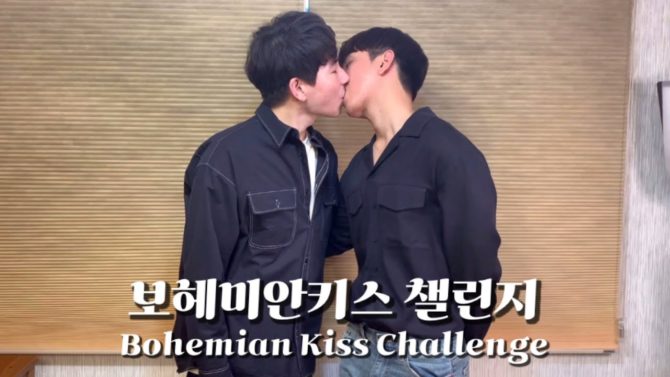 A new activism campaign fueled by kisses began on YouTube this week, following the censorship of a kissing scene in a TV broadcast of the film Bohemian Rhapsody. Activists have called on LGBTQ people in South Korea–and all over the world–to upload videos of kisses to social media in protest.

The episode began last week, when South Korean network SBS censored scenes of Bohemian Rhapsody either through edits or blurring effects. The network claimed that the scenes made family viewers “uncomfortable.” The immediate backlash from the queer community followed, both in South Korea and abroad.

Now a pair of Korean YouTubers–Kim and Backpack, who operate the channel TV Mango Couple–have called supporters of queer rights to arms…or perhaps more fittingly, lips. The pair uploaded a video to YouTube sparking the #BohemianKissChallenge.

“It doesn’t matter what kind of kiss you do,” Backpack explained in the demonstration video. “Just post pictures of videos of you kissing, and it doesn’t matter if you’re not actually a couple.” The pair also encouraged participants to use the hastag #BohemianKissChallenge as part of the campaign.

At the time of this writing, the original video has received more than 22,000 views. Other videos have begun popping up on Twitter and Instagram as well.

Bohemian Rhapsody tells the life story of bisexual singer Freddie Mercury of the band Queen. Censorship has been an ongoing issue for the film in foreign markets, including South Korea and China. Somewhat ironically, the film–for which actor Rami Malek took home a Best Actor Oscar–received criticism in the United States when it premiered for not featuring enough same-sex affection.