Las Vegas may be considered the Entertainment Capital Of The World. No other place boasts such a dazzling array of shows. Some of the most popular shows are the full stage productions, featuring acrobats, dancers and various unique talents that must be seen to be believed. We have picked some of our favorites, from traditional song-and-dance shows to provocative productions that will make a trip to Las Vegas a most memorable experience. 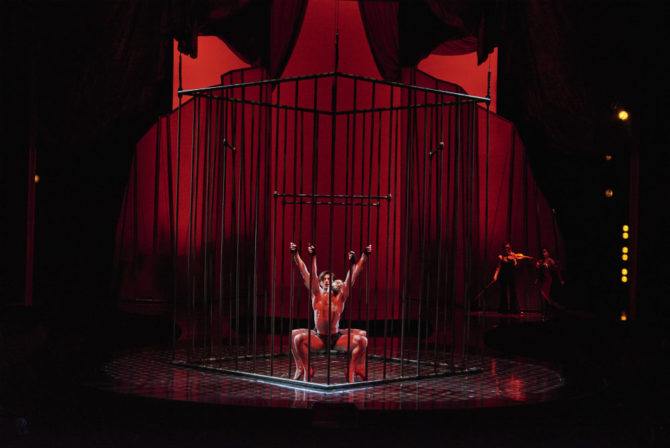 From the moment you enter the Zumanity Theatre at New York-New York Hotel & Casino, the sense of something “different” surrounds you. Hosted by longtime Las Vegas luminary Edie the Entertainer, Zumanity features dazzling displays of human capabilities stretched to their limits, but it also touches on the darker side of eroticism, on the primal urges of our natures and on the topics that others dare not touch. Though some of the acts present serious images of eroticism, it never lets you forget that our bodies and our lives are meant for pure pleasure and sheer joy—and that joy is meant to be shared. 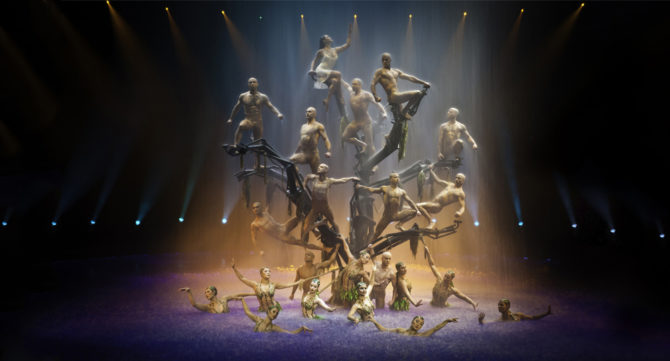 In Le Rêve—The Dream at Wynn Las Vegas, all of the action in the show takes place in, around and above a round, 1.1 million-gallon tank of water that serves as the stage. Below the surface of the water are platforms that rise and descend for the various scenes. Synchronized swimmers glide through the water, performing an elegant ballet. Aerialists soar through the air and dip into the water below. Huge nets rise out of the water and performers leap from them, landing perfectly in the pool. High divers make the audience gasp as they plunge into the water nearly 80 feet below. Audiences at the end of Le Rêve may not want to awaken from their reverie, but they will leave the theater knowing they have just seen one of the most technically amazing and artistic shows in town. 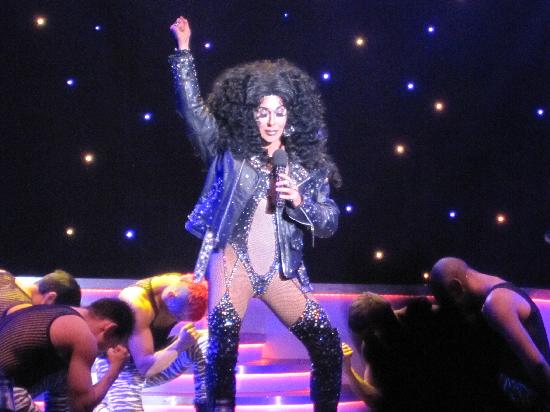 Known as the “Queen of the Strip,” Frank Marino sizzles in Divas Starring Frank Marino at The LINQ. Marino stars as comic icon Joan Rivers, hosting the 75-minute show featuring an all-star cast of superstar female impersonators who not only recreate, but almost uncannily duplicate, the likenesses of celebrities ranging from Britney Spears to Cher, Diana Ross and Beyoncé. Even Madonna and Dolly Parton have been known to stop by. Fun Fact: This is the show where drag stars Coco Montrese (as Janet Jackson) and Derrick Barry (as Britney Spears) performed before competing on RuPaul’s Drag Race. 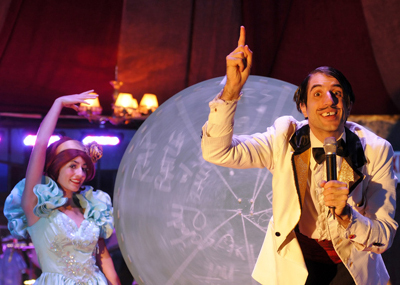 Combining old-world burlesque with world-class specialty acts and outrageous comedy, Absinthe at Caesars Palace is an adults-only, circus-style spectacular. The show is edgy, outlandish and uncensored, featuring a diverse line-up of unique acts that range from playful and seductive to awe-inspiring. Singing, burlesque-style stripteases, aerialists and acrobats, the team of artists perform incredible feats of virtuosity within mere feet of the crowd. Sit in the front row, and the host may target you as the punch line for the night. You’ve been warned. 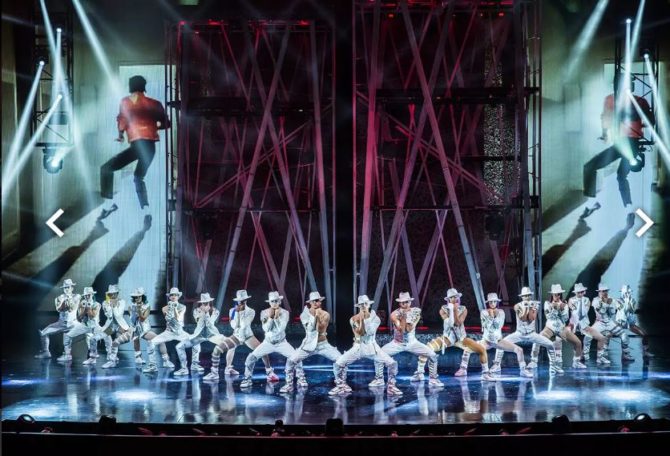 Michael Jackson ONE at Mandalay Bay features innovative new Cirque du Soleil acrobatics, cutting-edge video and light effects, state-of-the art surround-sound environment and amazing dance numbers. But the star of the show is Michael Jackson. Throughout the performance Jackson appears both aurally and visually. The theater’s stage and walls have been transformed to create the most dynamic and immersive video displays to be experienced in Las Vegas. GPS trackers allow the show to project video anywhere, even on the performers. Michael Jackson ONE showcases re-mastered versions of Jackson’s hits. Separate groups of speakers plus in-seat speakers, three in each chair, create a layered audio effect like a true Jackson concert experience.

6. Marriage Can Be Murder 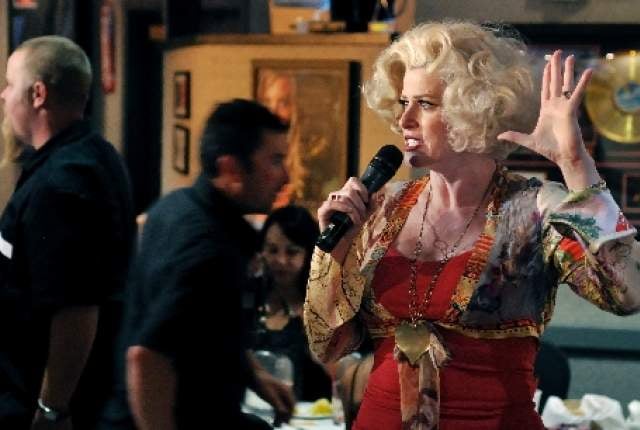 No, it’s not your average bachelor’s view of saying, “I do.” In this case, the saying is literal. Marriage Can Be Murder at The D Las Vegas downtown is an award-winning interactive comedy and murder mystery dinner show where the audience members become part of the show. If you liked the movie Clue, then this is a dinner show that you will want to sink your teeth into. 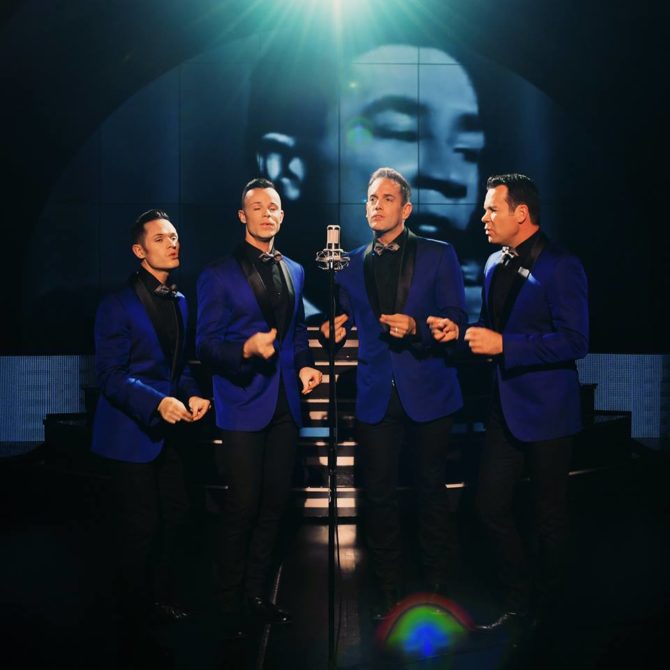 Human Nature always gave us sunshine on a cloudy day, and now they’re going to give us a whole lot more. Australia’s top-selling pop vocal group and Las Vegas favorite, Human Nature delivers the ultimate party with Human Nature Jukebox at The Venetian. The talented quartet mixes pop classics with doo-wop, Motown and soul into a stellar array of jukebox favorites.

Britney, Adam Levine and New Year’s Eve in Las Vegas. Does it get any better?