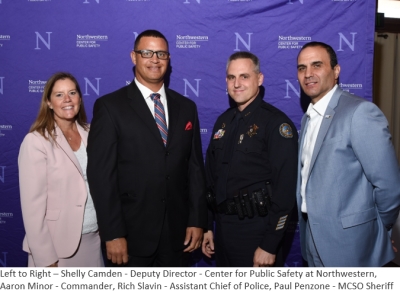 A 20-year veteran of the Scottsdale, Arizona police department has filed a lawsuit claiming he was fired after reporting a fellow officer’s homophobic remarks according to NBC News.

Aaron Miner became the Scottsdale Police Department’s first African-American commander in 2014. He now claims that he became the target of an internal investigation after he reported  Assistant Police Chief Richard Slavin made multiple homophobic remarks during a staff meeting earlier this year. Minor says he reported the remarks to Assistant Police Chief Scott Popp, and even confronted Slavin about his words face-to-face.

Slavin admitted making the remarks, saying he was “truly sorry for doing so and referred to them as a “failed attempt at a joke.” Police Chief Alan Rodbell then discussed the matter with Slavin, who admitted to making the remarks and that they violated the city’s anti-discrimination and non-harassment policy. That violation could have had Slavin fired.

Related: Texas teacher claims he was fired after coming out as gay to his students

Instead, Rodbell never reported the matter to human resources, as is required by policy, opting instead to council Slavin himself and take no official disciplinary action. Six weeks later, Rodbell’s failure to report the incident to HR launched an internal investigation after multiple witnesses complained about Slavin’s homophobic remarks. During that investigation, Miner was interviewed about the Slavin incident.

Miner then filed a complaint of his own, alleging  “mismanagement and abuses of authority,” on the part of  Chief Rodbell. Two weeks later, Rodbell fired Miner and refused to disclose the reason why. Miner only received a letter saying “We have lost and confidence in your ability to fulfill the duties and expectations of this position.” He was also told he had no right to appeal the decision.

Miner’s lawsuit alleges that Cheif Rodbell launched the investigation into Miner as retribution for his description of Slavin’s comments. It also further states that Miner was denied due process, as well as the ability to respond to allegations against him.