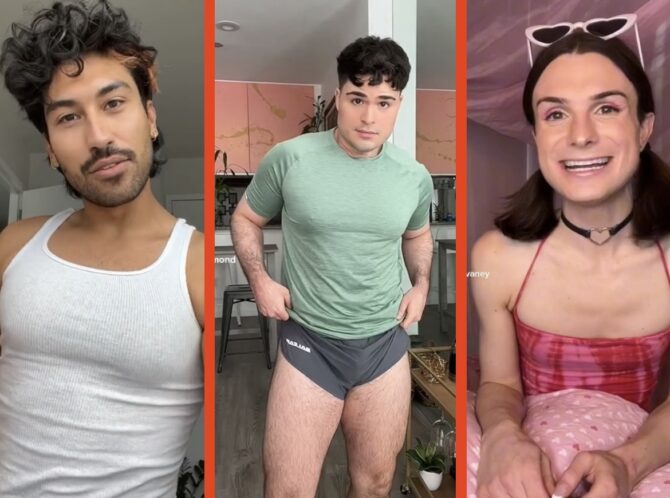 While we wait for whatever is to come, we might as well pass the time with a little fun.

The results of this current Supreme Court term are some of the most anticipated and dreaded in recent history, and understandably so. After the leaked ruling to overturn Roe v. Wade, the subsequent leak investigation, and the recent threat on Justice Brett Kavanaugh’s life, the tension is reaching a fever pitch.

With a dozen or so decisions still left on the docket before the term ends, it’s hard not to refresh every hour on the hour to make sure you haven’t missed the country crumbling.

If your brain needs a rest from news sites and political platforms, we’ve got you covered.

Here are 5 queer TikTok accounts to interrupt your doomscrolling:

Who better to keep a gay afloat than the king of Slay™ himself? Eric “ThickyRicky” Sedeño is arguably one of the most infectiously silly users on TikTok, and clocking in at over 750K followers, people seem to agree. His “Get ready with me” videos like this one as well as his general comedy posts are sure to keep a smile on your face (and your mind in a slightly less anxious space).

Dylan Mulvaney has been documenting her transition journey with the world for months (in fact, she reached day 100 yesterday!), and it’s been a delight to follow along. Mulvaney’s sunny disposition and spirited storytelling are a balm for the spirit, and the occasional celeb cameo from queer icons like Jonathan Van Ness and Jeffrey Marsh certainly don’t hurt.

You know what? Sometimes the best way to turn your brain off is to just stare at a hot guy. Between some joke posts, some fun original pop songs, and enough thirst traps to vaporize a fire hydrant, Cole Diamond has the whole package. Sorry, the TOTAL package.

If design and crafts catch your eye, you have to follow Cameron Hughes. He’s recently garnered acclaim with his kinetic fashion like the angelic headdress seen here that he constructed for the finale of Rupaul’s Drag Race, but it doesn’t stop there. He’s dressed Charli XCX, Doja Cat, and Gigi Hadid in some of the most cutting edge fashion tech out there, all with his own two hands.

Absolutely the most chaotic entry on this list, this TikToker by the character name of Terri Joe is a mess and a half. She goes live almost daily to host something akin to an amicably hostile talkshow in which she acts like a politely homophobic Southern belle and calmly roasts her talking partners (most notably calling her guests “Homasekshals”). If Wendy Williams going off the air and Ziwe only having six-episode seasons leaves an empty space in your heart, Terri Joe just might fill it.

baring it all
14 comments