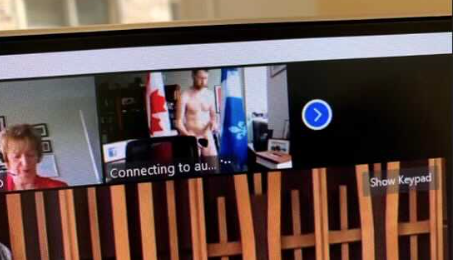 A Canadian MP has apologized after popping up naked during a virtual parliamentary sitting, explaining he was getting changed in his office and didn’t realize the camera was turned on. It happens!

Will Amos says he is embarrassed by the mistake.

The accidental exposure was brought up by Speaker Anthony Rota after Prime Minister Justin Trudeau was done answering a question in the House.

"I think that this, today, we have beaten— we have set a new record. We've seen a member during Question Period improperly dressed — that is, uh… unclothed." pic.twitter.com/a3fProg7q7

“As you know, since the beginning of the pandemic we have tried to emphasize the importance of respecting … the dress code here in the House,” said Bloc Québécois MP Claude DeBellefeuille.

Anyone recognize this MP wandering around in the buff in their office while taking part in the hybrid Parliament? Obviously, given the flag, they are from Quebec. Wonder what kind of mobile phone he uses? #cdnpoli pic.twitter.com/HWOeR9ZJBV

“We have seen that the member was in very good shape, but I think that this member should be reminded of what is appropriate and to control his camera.”

“It was an honest mistake,” Rota said, promising it “won’t happen again.”