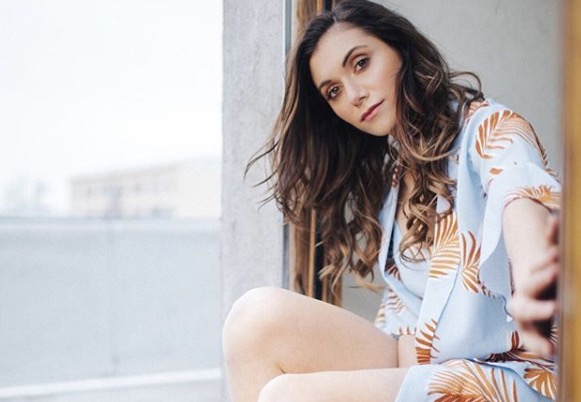 Alyson Stoner, known for her roles on Disney’s The Suite Life of Zack and Cody and in Cheaper by the Dozen, has come out as queer in a heartfelt essay.

The actress and musician and Missy Elliott backup dancer describes her struggle to fully accept herself, revealing she spent time at religious conversion therapy.

Now she’s fully embracing who she is and says that falling in love with a girl has been a major influence on her music.

“My lyrics and melodies before I met her feel light-years away because of her profound effect on me. My new single ‘When It’s Right’ is the first painting of a vivid new world I now call home, and she’s the main inspiration,” she writes in Teen Vogue.

Stoner also shares some details of the romance, explaining that a friend invited her to a dance class and she was “mesmerized and intimidated” by the teacher.

After the class, she texted her friend and her mom: “I met a woman today, I’m not sure who she is or what I’m feeling, but I think she’s going to be in my life for a very long time.”

When you know, you know!

What she initially thought would be a close friendship progressed into something more. “Our bond didn’t feel quite sisterly or platonic,” she writes.

“Flashes of her smile progressed to flashes of her wavy hair followed by the curve of her hips through her straight-leg pants. I realized I had never fantasized about a guy this way, nor really ever felt comfortable dating guys.”

Stoner found herself at odds with her religious conditioning, however, and struggled with her attraction for years.

She even spent time at conversion therapy to “fix” herself.

“I prayed in turmoil nightly, begging to be healed from these desires. Certain pastors and community members tried to reverse and eliminate my attraction to her.

“I pursued physical relationships with men to convince myself that my love for her was just a spiritual battle attacking my character and discernment.

“I pored over texts, contemporary and ancient, seeking truth and answers from professors, scientists, church leaders, friends, and family.

“I didn’t want to get this wrong. After all, not only was I trying to be a ‘good and upright’ person, but I’m also a public figure with responsibility and extreme pressure,” she writes.

It understandably proved to be too much to try and change her core, and once she stopped fighting herself, she felt “a transformation, an ascension, an approach to life rooted in real love.”

“I, Alyson, am attracted to men, women, and people who identify in other ways. I can love people of every gender identity and expression,” she writes.

“It is the soul that captivates me. It is the love we can build and the goodness we can contribute to the world by supporting each other’s best journeys.”