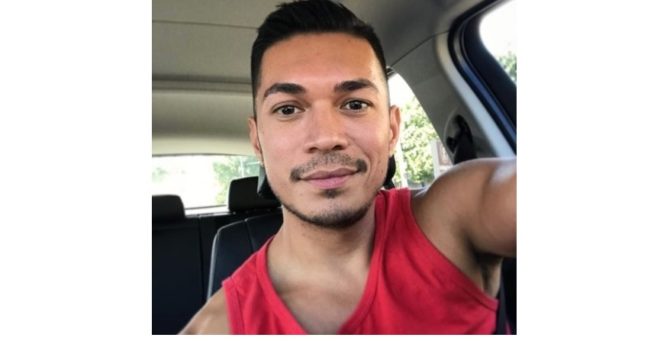 He may not fit the profile, but Albertino (Tino) Ritualo says he’s best friends with his four-year-old grandson.

He’s also opening up his experience coming out as gay, and oh yeah– he’s 36-years-old.

Tino’s story is certainly eyebrow-raising: He became a father at just 14, and a grandfather in his early 30s.

He grew up in a Catholic Philipino home and has been out of the closet for over a decade.

Speaking to GSN, he shared what it was like to be raised by his own grandparents, only to have his grandpa die when he was 12:

“He was the glue that held us all together and once he passed, my grandmother gave up,” he said.

After that, Tino had to fend for himself, relying on friends’ hospitality.

“I bounced from home to home sleeping on friends’ couches finding food where I could,” he said.

Soon he met a girl; the couple had two children by the time Tino had turned 20.

“I met my daughter’s mother through her brother, who was my best friend at the time.

“They weren’t part of the family I was staying with. More so the rebel kids I was running away with,” he shared.

At the same time he learned he would be a father, Tino was also struggling with the fact that he knew deep down he was gay.

“Knowing I was different and wanting to provide a different life for my child motivated me to fight for a way out.

“I got myself through school, held a full-time job and took on fatherhood the best I could… without knowing what or who I was supposed to be,” he said.

He moved to Seattle, started dating guys, and found out his daughter got pregnant during her senior year of high school.

“I felt it was history repeating.”

“Once my grandson was born though and I held him for the first time, I knew things had to change, I knew I had changed. He pulled me out of that depression I was in by giving me a focus,” he said.

After a long and bumpy road, Tino is now dedicated to building a future for his family that’s full of opportunity and love.

“Last year we bought our house and for the first time in a long time – slowly but surely – things are feeling blissfully normal and I owe that to him.”

Leo, Tino’s four-year-old grandson, lives with him, his daughter Tiyanna and son Dionisio.

“With him by my side,” Tino added, “I have been facing every fear I’ve had about myself, fatherhood and family.”