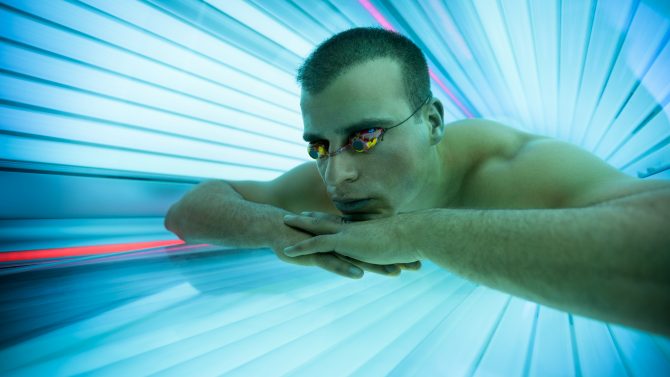 Another study has found that gay and bi men are more prone to skin cancer. One of its authors has speculated that increased use of tanning beds may not be the only factor driving this.

The same researchers also carried out a separate study into skin cancer and gender identity. It found gender non-conforming individuals also have an increased risk of skin cancer.

Related: Gay men are more prone to skin cancer thanks to fake baking

The sexual orientation study examined data from 845,264 men and women gathered between 2014-2018. Participants identified as heterosexual, gay, lesbian or bisexual.

Previous studies have shown that gay men are more likely to use tanning beds, and it’s been speculated that the increased risk of skin cancer may be due to this. The researchers agree this is likely a factor but say other “biological reasons” may also be involved.

“An explanation for these differences could arise from either biologic reasons or behaviors,” co-author Dr. Arash Mostaghimi, director of dermatology inpatient consultation at Brigham and Women’s Hospital in Boston, told Queerty.

“Any specific biologic difference is speculative, but one could conceive of differences in viral exposures such as HPV [human papillomavirus] that might account for part of what we are seeing. Additional research needs to investigate the root cause of the differences we’ve identified.”

Related: Why some gay men are getting this test to detect the early signs of a specific cancer

The second study – believed to be the first of its kind looking at skin cancer and trans people – examined data from over 860,000 individuals. This included trans and gender non-conforming people (GNC).

Compared to cisgender men, skin cancers were 15% less common in cisgender women, but more than twice as common among GNC individuals. There was little difference between the incidence of skin cancer between trans men and women and their cis counterparts.

“The GNC finding was a bit of a surprise,” Mostaghimi told Reuters. “We would really like to explore that further to find out why gender nonconforming individuals might have a higher rate of skin cancer.”

The researchers say more research is needed to explain these differences, but say physicians should take sexual orientation and gender identity into account when assessing someone’s healthcare needs and risk of skin cancer.

It also says health experts should continue to warn patients of the risk of using indoor tanning beds.

To avoid skin cancer, most experts agree: Wear a broad-spectrum suncream with a minimum SPF of 15 or higher every day; reapply the cream every couple of hours if exposed frequently to the sun; don’t allow your skin to burn; avoid the midday sun; don’t use tanning beds; and wear wide-brimmed hats and UV-protected sunglasses.

Check your skin regularly from head-to-toe for any changes or moles/freckles that may develop or change shape and speak to a physician if you have any concerns.