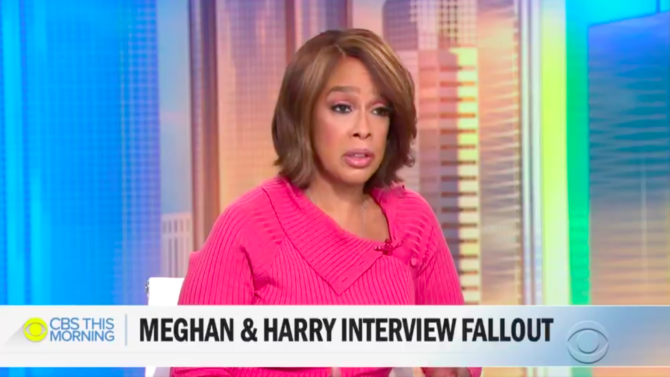 According to Oprah‘s BFF, Prince Harry has spoken to his dad, Charles, and brother, William, since last week’s bombshell interview and things didn’t go well.

The Prince told King the conversations were “not productive,” which everyone knows is British for “it went really, really f*cking badly.”

“I’m not trying to break news, but I did actually call them to see how they were feeling,” King said. “And it’s true, Harry has talked to his brother and he has talked to his father, too. The word I was given was that those conversations were ‘not productive.’ But they are glad they have at least started a conversation.”

But, King added, “No one in the royal family has talked to Meghan yet.”

Honestly, is anyone surprised about that?

.@GayleKing checked in with Prince Harry & Meghan this weekend:

“What is still upsetting to them is the palace keeps saying they want to work it out privately,” King continued, “but they believe all these false stories keep coming out that are very disparaging against Meghan still.”

“I think it’s frustrating for them to see it’s a racial conversation about the royal family when all they wanted all along was for the royals to intervene and tell the press to stop with the unfair, inaccurate, false stories that definitely have a racial slant.”

“Until you can acknowledge that, I think it’s going to be hard to move forward.”

King said the couple wants “healing” because “at the end of the day, that is Harry’s family.”

But, should the royal family choose to go a different route, King said, “Meghan has documents to back up everything that she said on Oprah’s interview.”