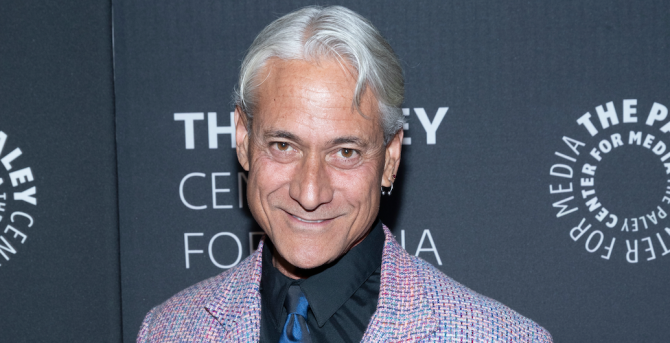 Bio: Louganis is the only man to have swept the diving events at consecutive Olympic Games, earning gold medals in both the 3m Springboard and 10m Platform events at the 1984 Games in Los Angeles and the 1988 Games in Seoul. He had a scary moment in Seoul, though: His head struck the diving board during the preliminary rounds, splitting his head open and giving him a concussion.

Since his professional diving days, Louganis has ventured into coaching, acting, dog agility training, and writing. His 1996 memoir, Breaking the Surface, became a bestseller inspired a 1997 Mario Lopez TV movie of the same name.

Coming Out: Capping off years of rumors — and a disappointing snub by Wheaties — the California native publicly come out as gay in a videotaped welcome speech at the 1994 Gay Games.

“I had every expectation that if I went public with the fact that I’m gay, no one would want to hire me and I’d lose my house,” he later said at a press conference.

In 1995, Louganis told ABC News’ Barbara Walters that he tested positive for HIV before the 1988 Games and that it had developed into AIDS. “I may have been the brunt of criticism, but it forced people to take a look at it,” he told Queerty in 2014. “It forced people to talk about it. It forced people to learn how you get HIV and how you can’t get HIV. So, it turned out to be very empowering and meaningful.”

Making a Difference: In a 2012 Ability magazine interview, Louganis described his work with the Human Rights Campaign: “We’re trying to influence people in Congress, in the Senate, so everyone can see a human side of sexuality or of HIV.”

He went on: “Ultimately a lot of people want to stay within their comfort zones. Even people in the gay community stay within their comfort zones and don’t venture out, which is not always the smartest course of action. It’s important that people get to know various individuals and fully get to know who they are. So, the Humans Rights Campaign means dealing with issues of sexual identity or HIV or whatever type of discrimination or minority that might be affected.”

“It was important to show that, hey, even if you’re an Olympic gold medalist, we’re all going through this. When you feel that you’re not alone, then it’s really empowering.” – Greg Louganis to NBC Sports