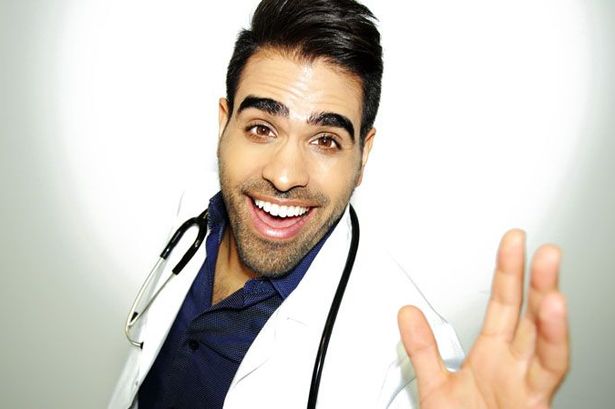 We first learned about Dr. Ranj Singh, the British doctor/TV presenter/author, earlier this year when he appeared on Strictly Come Dancing, the U.K.’s version of Dancing With The Stars.

Since he popped onto our radar, we’ve been checking his Instagram page regularly to fawn over the photos.

When you TOTALLY FAIL at working from home… So you eat everything in the fridge, sit on your backside in your pants and procrastinate by taking selfies all day… ?????

Now, the 39-year-old pediatrician-turned-TV-star sits down with Gay Star News to talk about his newfound celebrity.

“I knew going into Strictly, you do open yourself up to the press, the public, and online,” Dr. Ranj says. “Some people look and hunt for stories. No stone will be left unturned. And I had no secrets. I’d been very vocal about my background, my sexuality. I’d already been very open and honest.”

Dr. Ranj came out publicly in a 2015 interview with Attitude magazine, shortly after divorcing his wife, who he had met in his early 20s in med school.

Before becoming a media personality, he worked in several hospitals around London, specializing in Pediatric Emergency Medicine.

Asked how being on Strictly Come Dancing changed his appearance, Dr. Ranj replies: “It’s so physical, you do get fitter. Some people lose weight. I gained it, which was odd.”

Me getting dolled up for @bbcstrictly tonight! ?

Dr. Ranj says prior to Strictly, he struggled with his weight.

“I wasn’t especially overweight, but because I’m not particularly tall, my BMI very easily falls into the overweight category, if I’m not careful,” he explains.

“As you and I both know, the LGBT+ community is a sometimes a very visually-focused community. How you look gets a lot of undue attention, [resulting] in what I call ‘unrealistic bodies’.”

Going forward, he hopes to combat the idea that a guy needs to have a perfect physique in order to be considered sexy.

“I’m all about promoting varieties of what normal is, and giving people a realistic image,” Dr. Ranj says. “Six packs, pecs, huge calves are not realistic for the vast majority of us. … People need to realize that’s just an ideal. That’s not reality or normality.”

Rocking my #SparkleOn Xmas jumper in aid of @nspcc_official… Grab yours in the NSPCC online shop & text SPARKLE to 70007 to donate £3 & help keeps kids safe from abuse this Xmas & all year round ??x

Asked whether more guys approach him to dance when he goes out to the gay bars these days, Dr. Ranj says it happens all the time.

“Funnily enough, there’s a pub close to me that’s popular with rugby players. I bumped into Thom Evans,” he recalls. “Obviously he was a contestant before. We had a mini dance off!”

“I was like ‘This is really weird.’ We looked really odd. We were trying to out cha cha each other… But he was loving it.”