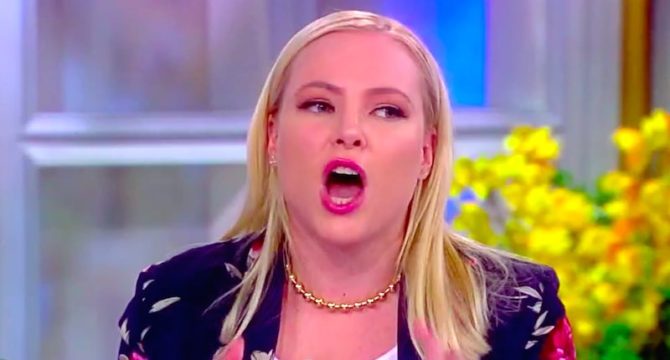 This just in: Meghan McCain is officially done at The View.

That’s right, folx. John McCain’s daughter is quitting the show with two years still left on her contract because, well, it’s been pretty obvious for a while now that she’s “over it,” as she likes to say, and that she hates all the other co-hosts.

According to the Daily Mail, McCain plans to make the big announcement on today’s show.

“We have tried to keep her, but she is adamant that now is the right time for her to leave,” an insider says. “She will finish at the end of July 2021.”

Since joining the show in 2017, McCain has frequently sparred with her colleagues while constantly invoking her father, who was John McCain, in case anyone forgot. Over the past several months, however, the sparring has veered away from thoughtful discussions and into some pretty toxic personal attacks.

Here’s how Twitter is reacting to McCain’s sudden departure…

Meghan McCain is leaving The View to continue her lifes work of demanding to speak with the manager. pic.twitter.com/5zt7hWa0Vm

I love that this is how I found out Meghan McCain is leaving The View? https://t.co/t4zonRmFri

In honor of Meghan McCain leaving The View here's my favorite picture of her time on the show. The morning after Democrats won control of the Senate. #TheView pic.twitter.com/IRXjXohQov

BREAKING- Meghan McCain is leaving The View to devote more time into being a horrible person.

some personal news: I am a new co-host of The View

Meghan McCain is leaving The View which is great news for anyone fighting disinformation bc all she does is recycle talking points from OAN and the Federalist Society to manipulate viewers. Abortion is NOT murder. Kneeling is NOT unpatriotic. Universal healthcare is NOT radical.

Meghan McCain is leaving The View.

Let’s all give a moment of silence to the worst hair on television. pic.twitter.com/0jD4JxP8lr

Meghan McCain is reportedly quitting her job at The View. I'm not surprised, but I'm happy for Whoopi & Joy. Those poor women were about to have permanent nerve damage from all the eye rolling they did anytime Meghan opened her mouth.

Lmao. Meghan McCain is leaving The View. Whoopi Goldberg is having Belgian waffles and mimosas for breakfast today. #TheView pic.twitter.com/8J2xa0XdvV

The View that Meghan McCain has is one we no longer have to see.