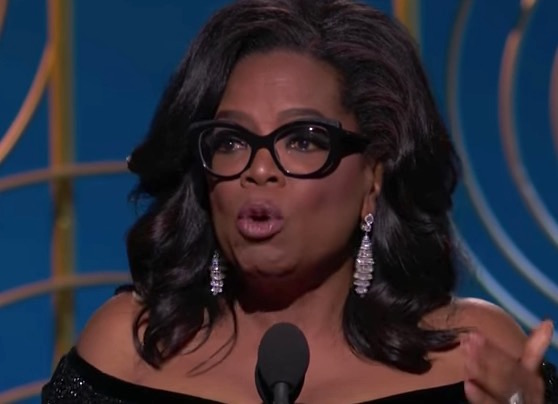 According to a CNN report, two of Oprah Winfrey‘s “close friends” claim she’s “actively thinking” about running for president.

The sources, who wished to remain anonymous, talked to CNN after Winfrey’s triumphant Golden Globes speech, which have led to a load of rumors about a 2020 run.

The sources claim friends have been urging Winfrey to run for months, but she’s yet to make up her mind.

“President Winfrey” was a running theme throughout the Golden Globes ceremony on Sunday after she accepted the Cecil B. DeMille Award.

The overall message of her speech — “A new day is on the horizon” — was in reference to the #MeToo movement, but could also be read as her hinting at a potential presidential run.

Related: Why did Oprah Winfrey give this antigay pastor his own talk show?

Political pundits claim Winfrey’s wealth and fame would make her a Democratic Party candidate to be reckoned with, while critics wonder if the American people would be choose two TV stars as president in a row.

At the conclusion of the speech, Winfrey’s partner Stedman Graham said a run is quite possible.

“It’s up to the people,”Graham told the Los Angeles Times. “She would absolutely do it.”

“There’s only one person whose name is a verb, an adjective, and a feeling,” Reese Witherspoon said while introducing Winfrey at the Globes. “And that is Oprah.”

Last March, David Rubenstein of Bloomberg brought up the possibility of a presidential run with Oprah, saying, “It’s clear you don’t need government experience to be elected president of the United States.”

But when her best friend Gayle King brought up a presidential run on “CBS This Morning,” Winfrey sounded pessimistic: “There will be no running for office of any kind for me.”

Detractors wasted no time in unearthing an old photograph of Oprah Winfrey standing alongside Harvey Weinstein, the ruined movie mogul.

Seth Meyers stoked speculation during one of his monologues.

“Oprah,” he said, “in 2011, I told some jokes about our current president at the White House Correspondents Dinner — jokes about how he was unqualified to be president — and some have said that night convinced him to run. So if that’s true, I just want to say: Oprah, you will never be president! You do not have what it takes!”

It was clear by the rousing applause Hollywood was certainly in support of the idea.