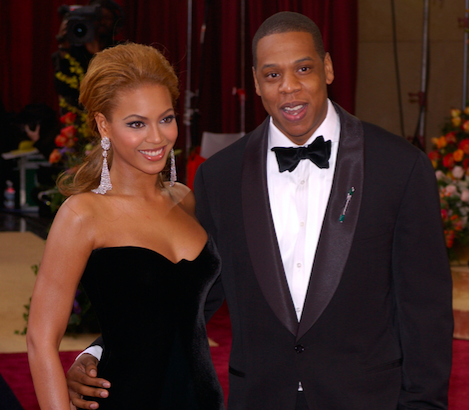 So Beyoncé and JAY-Z are being honored for their support of the LGBTQ community.

GLAAD just announced that the power couple will be presented with the Vanguard Award, which acknowledges individuals for making a “significant difference in promoting acceptance of LGBTQ people”.

“Beyoncé and JAY-Z are global icons and passionate defenders of human rights and acceptance for all people,” GLAAD President and CEO Sarah Kate Ellis said in a statement. “When Beyoncé and JAY-Z speak, the world becomes inspired and when it comes to LGBTQ people, their voices of acceptance have been heard loud and clear.”

But a lot of people on Twitter seem rather confused by the whole thing, especially given JAY-Z’s very long history of using antigay slurs in his songs.

Please inform me how that man has made a “significant difference in promoting acceptance of lgbt people” lmao I’m clearly missing something. I wouldn’t even say Beyonce has done all that.

im sorry but why is beyoncé receiving a lgbt ally award

Beyonce and jay z getting lgbt award but not frank ocean…….lol anyways pic.twitter.com/Lz8y4XDBAB

Beyoncé is pro LGBT, but she’s not a public Ally or advocate. I can count on one hand the mainstream artist who go up for ALL of us.

They just gave her this award so people will watch. The bar is low… And Jay??? The bar is in hell. ?

Giving Beyonce and Jay z lgbt awards is one of the dumbest things I’ve not seen today.
Gay people get murdered daily, but two hetero millionaires who did the minimum by supporting gay rights like twice get awards. Yeah bye. Why can’t you honour Ellen Page or someone deserving?

Lgbt artists try to make a change for our community, not heteros. Stop this shit. pic.twitter.com/ansudn8j4r

WTF has Jay Z ever done for the LGBT community exactly?! That’s just fucked up.

Beyoncé I can understand but Jay Z?

Straight people being honored for treating LGBT like humans? The standards are low and keep getting lower…

Beyoncé is a LGBT ally. JAY-Z is not.

We’ll be honest and say we can understand why some people might be uncomfortable with a guy with lyrics like “Too many f*ggot n*ggas clocking my spending” (from the song “22 Two’s”), or “f*ggots wanna talk to Po-Po’s” (from the song “N*gga What, Nigga Who”), or “this little f*ggot in the corner calling 911” (from the song “Gangsta Shit”) getting an LGBTQ ally award from GLAAD, but we don’t make these decisions.

Some of Jay-Z’s other homophobic lyrics include:

In his defense, many of those songs came out a long time ago, and people can change.

Last year, JAY-Z received a GLAAD Special Recognition Award for his song, “Smile” about his mother, Gloria Carter, who identifies as lesbian.

The Carters will be presented with the Vanguard Award at the GLAAD Media Awards in Los Angeles on March 28.