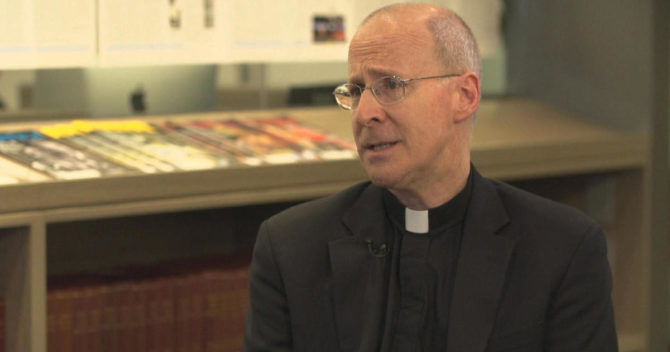 One of the most prominent Catholic leaders has spoken out against homophobia after vandals defaced a church.

Father James Martin has earned respect far outside the church for his media appearances on shows like The Colbert Report and on CNN. He’s attracted his own share of criticism for preaching love and acceptance of the LGBTQ community within the highly-traditional Catholic church. “This is what hate does, especially the kind of hate whipped up online,” Martin observed in a Facebook post.

Related: Meet the 11 gay or bisexual Catholic popes from history

In a post to Facebook on Oct. 16, Martin reported the anti-gay defacement of a California church. Vandals broke into the church office and spray painted the words “No Fags” on the wall. The graffiti comes as the latest in a string of incidents tied to a church employee identified only as “Aaron” in media reports. The same church has had its doors set on fire, and Aaron has had his tires slashed, been attacked by a parishioner following Mass, and received countless threats via email and phone calls. The FBI got involved earlier this year and advised Aaron to leave his job. He refused on the grounds of spiritual conviction.

This the result of the relentless homophobia and hatred being peddled in some quarters of the Catholic church today: My…

Father Martin has called on the church leadership to condemn the attacks, and to defend LGBTQ members and employees. “Our bishops must stand up to this kind of hatred,” he wrote in his post, “We must all take a stand against this.” Martin’s plea comes following the publication of his 2017 book Building a Bridge which outlines his reasoning and support for accepting and including queer people in Catholic teaching. Martin’s work also echoes that of Pope Francis, who has called for love and tolerance of homosexuality.

Needless to say, Martin’s work has earned him criticism from Christian fundamentalists inside and outside of Catholicism. Still, Martin has spoken to various LGBTQ outlets, explaining his position.

“The main reason that I’ve become involved in LGBT issues is because LGBT people are part of the church, and so they deserve to be cared for,” he told PinkNews earlier this year. “They are also the most marginalised group in the Catholic Church and for that reason they deserve special care and attention.”