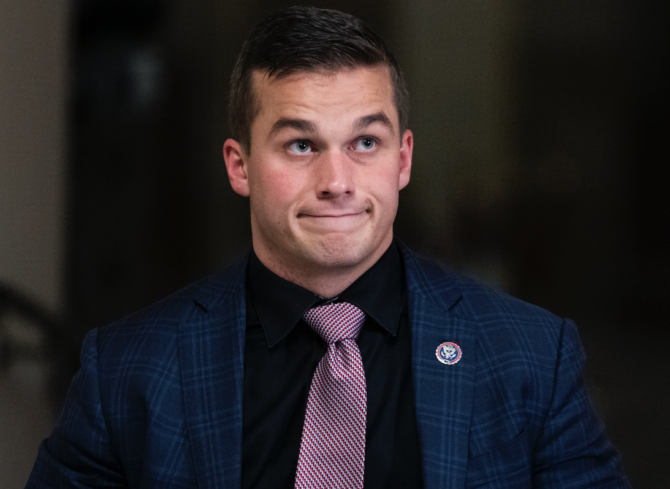 Rep. Madison Cawthorn is having a rocky week. The same day he was cited for possession of a loaded handgun at Charlotte Douglas International Airport, the lawmaker was accused of possibly violating federal insider trading laws with his recent social media posts hyping the “Let’s Go Brandon” cryptocurrency.

Multiple federal watchdog groups told the conservative outlet the Washington Examiner that Cawthorn may have acted unlawfully when he praised the LGB meme coin, which is now the focus of a class-action lawsuit over an alleged pump-and-dump scheme.

The groups cited Cawthorn’s December Instagram posts about the cryptocurrency. “LGB legends. … Tomorrow we go to the moon!” he wrote in one, adding that he owned some of the currency.

The very next day, the NASCAR driver who inspired the right-wing rallying call, Brandon Brown, announced a sponsorship with the crypto. According to the watchdog groups, it could be a big problem if Cawthorn knew about the deal ahead of time and still promoted LGBCoin online.

“Having advance and nonpublic information that is then used to gain advantage in a financial market (including straight up commodities) is illegal, making my call for DOJ or SEC investigation still operative in this case,” said Dylan Hedtler-Gaudette, the government affairs manager for Project on Government Oversight.

“This looks really, really bad,” Hedtler-Gaudette added. “This does look like a classic case of you got some insider information and acting on that information. And that’s illegal.”

“I think there’s probably a strong case here. I don’t want to prejudge, but based on everything that’s out there, I think there is a very strong possibility that if someone is going to investigate this, they’re going to find something.”

The lawsuit against LGBCoin was brought by an investor who accuses the crypto of pumping up its value with high profile endorsements like Cawthorn’s, only to have insiders dump their holdings before the price fell.

“Insider trading by a member of Congress is a serious betrayal of their oath, and Congressman Cawthorn owes North Carolinians an explanation,” Tillis tweeted.