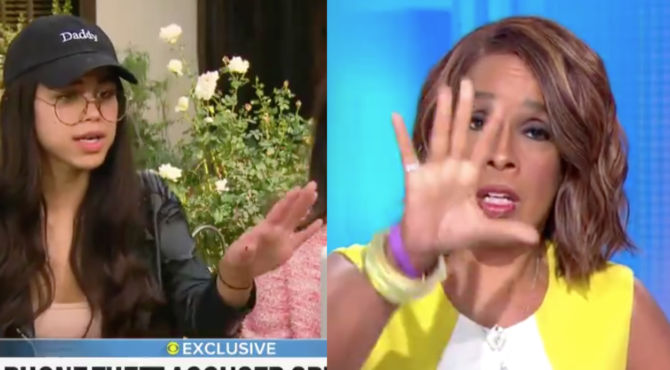 Miya Ponsetto, the 22-year-old woman dubbed “SoHo Karen” after falsely accusing a 14-year-old Black teen of stealing her phone and physically assaulting him in a hotel lobby, was “forcibly arrested” Thursday night after refusing to get out of her car and trying to slam the door shut on a deputy officer. But it’s this groan-inducing interview Ponsetto gave to CBS This Morning’s Gayle King that has everyone talking today.

If you haven’t been following the story, Ponsetto’s phone was actually sitting behind the front desk. She had left in in her Uber, and the driver had handed it over to hotel staff. She freaked out, screaming at the teen and attempting to tackle him. He suffered minimal scratches to his hands.

The boy’s father recorded this video leading up to the moment she got physical:

In an interview with Gayle King that aired Friday morning, Ponsetto, appearing alongside her attorney in a hat reading “Daddy,” attempted to justify her behavior, doing herself exactly zero favors by using “I’m a 22-year-old girl” as some sort of attempted defense.

King remains cool as Ponsetto grows more irritated (and irritating). As one commenter aptly put it, King acts more as a therapist than an interviewer, trying to get Ponsetto to recognize she behaved poooly. Ponsetto shows no remorse aside from admitting she “could have approached the situation differently,” and gets so upset that she shuts down King at one point. “Alright Gayle, enough,” she says, putting her hand out. Ponsetto’s lawyer, who does nothing but sit there while her client digs herself deeper into a hole, finally tries to get her on track, muttering, “stop it” under her breath. That’s where the interview ends.

The interview trended on Twitter shortly after it aired. You can see it, as well as what people are saying about that final moment, below:

The 22-year-old woman caught on camera allegedly physically attacking a 14-year-old Black teen and falsely accusing him of stealing her phone was arrested in California.

In an exclusive interview, Miya Ponsetto and her lawyer spoke with @GayleKing hours before she was arrested. pic.twitter.com/ezaGkcWZ8j

“I’m a 22 year old girl” “alright Gayle, enough” please pay attention to how they infantilize themselves and then speak to Black adults as if they’re children. https://t.co/2UqdTyk6sz

Lmaooo. You do this to most black women and you'll get your soul slapped out of you. She's lucky there's a computer screen in between (and that Gayle King is a saint) https://t.co/yprmQVoC6o

as Gayle's former assistant, i can say her levels of patience and grace (especially considering that she doesn't drink lol) boggle my mind to this day. https://t.co/SAv4TNdZ9z

This is the most disastrous interview I’ve ever seen in my life. The sheer patience of Gayle King here is remarkable. I don’t know why Miya Ponsetto’s lawyer didn’t step in and end this disaster. pic.twitter.com/P2XHiuBlLQ

This IS racism in action. https://t.co/UQk713rgci

I just imagined speaking to any elder the way Ms. Daddy Hat spoke to Gayle King and I nearly blacked out from the stress