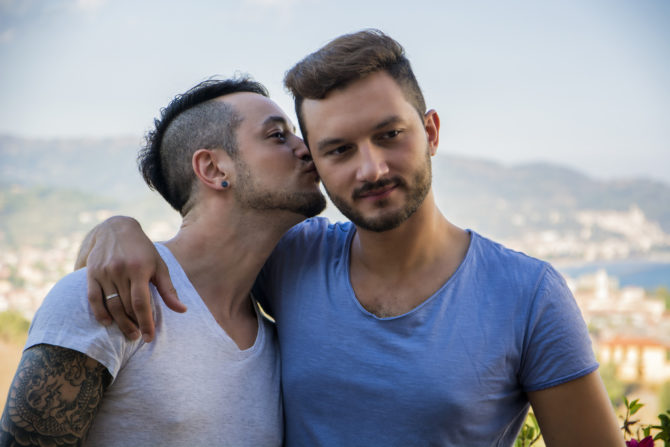 A fascinating new study titled The Bromance: Undergraduate Male Friendships and the Expansion of Contemporary Homosocial Boundaries pulls back the covers on just what straight dudes, particularly athletes, in bromances say and do with one another.

The study was just published in Sex Roles: A Journal of Research and is based on a series of in-depth interviews with 30 British undergraduate sports students.

Researchers set out to answer three questions: Do bromances exist in real life? What do they look like? And why should we care?

Related: The Art Of The Bromance, As Told Through Homoerotic Modern Dance

“We wanted to understand what a bromance was, why men have them and how they form,” Adam White, a PhD Candidate in Sport, Health and Social Policy, The University of Winchester explains. “With sports previously being a hyper-masculine environment, and universities being the first time many people have independence, sports students are a good indicator of future gender attitudes and their transformation.”

For the study, researchers defined “bromance” as “a highly close and intimate friendship, where both parties are emotionally invested in each other’s well-being.”

Participants suggested, for example, that a bromantic friend was “someone who is literally there for you all the time” and “will always be there to back you up if you need it”. A bromance is between friends whose mutual support is perceived as limitless and unwavering. All of the participants said they had at least one relationship they would class as a bromance.

So what did they learn?

“These men say that ‘there are no boundaries’ and ‘nothing is off limits’,” White explains. “They proclaim their love for each other, they share secrets and even discuss health anxieties. Whereas men will often exaggerate the number of sexual encounters they’ve experienced in regular conversation, there is no need for such inflated claims in bromances.”

The men also reported engaging in “non-sexual physical intimacy,” such as kissing, cuddling, and spooning.

“All but one of the men interviewed engaged in cuddling and spooning their bromances, and most had kissed their bromances,” White says. “They said things like: ‘You can lie in bed with your bromance, have a cuddle and just talk.'”

Just as men have traditionally bonded over common interests, whether that be sport, cars or other traditionally masculine pursuits, shared interests were also seen as a key characteristic of a bromantic friendship, especially in the formation phases. These men said things like “You have to have extremely similar interests and it has to build from that” and “When two boys meet and they get on well and have similar interests. They bounce off one another … they will be similar in personality.” They described the bromance as being a limitless same-sex friendship that is characterized by shared interests, physical tactility and emotional intimacy.

So what does this all mean exactly?

Well, aside from answering their initial question (“Do bromances exist?” They do!), researchers concluded that traditional notions of masculinity are on the decline, and that’s a good thing.

“Masculinity is no longer this debilitating and deadly curse that forces young men to act in a particularly toxic manner,” White writes, “and, as such, these emotionally open and loving bromances are blossoming.”