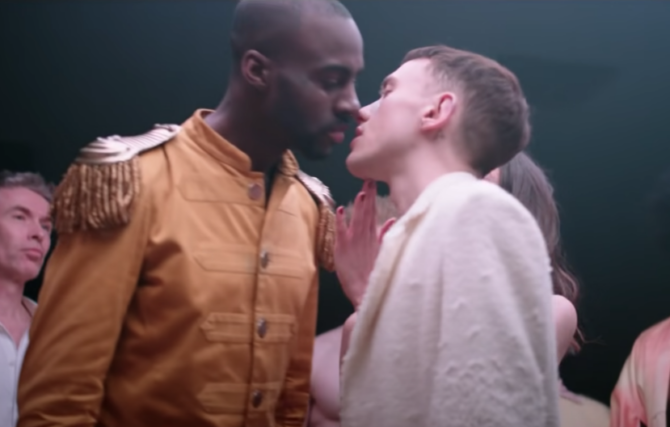 Whether they began their careers as their gorgeously realized, queer selves or found the courage to come out after becoming known entities, one thing is crystal clear: Living authentically makes for some powerful art. That may sound obvious, but for too long — and even still today — musicians have faced pressure to stay in the closet if they want to “make it.” Thank goddess these artists chose the other path, embracing who they are and spreading queer joy to audiences around the world.

To kick off Pride month, and just because we’ll never stop stanning creators whose drive to succeed doesn’t keep them from fully expressing themselves, here are five music videos that champion the LGBTQ experience.

Years & Years frontman Olly Alexander came out publicly as gay in March 2015, just before the release of his debut album Communion. The album was hailed for its unapologetic queerness, and the following year, Alexander released a new version of the track “Desire” featuring Tove Lo, along with a video meant to “celebrate all different kinds of sexuality and queer identities.” “Is it desire? Or is it love that I’m feeling for you?” the song asks, and judging by the video, there may be a third option — something in between that speaks directly to the queer experience.

Known to fans as the lesbian Jesus, Haley Kiyoko released “Curious” on her debut album Expectations. The former Disney star has said that after seeing the impact her music has on her fans, she wished she’d come out even sooner. “I want to be an artist, and I want people to know about me and know that I’m gay,” she told Today last year  “I’m sure there were many queer artists growing up, but I wasn’t aware of them. They weren’t given the platform that they deserved and I think that we’re trying to break that.” From where we’re sitting, she’s doing a pretty good job moving that needle.

In one of the best visual representations of the phrase “love is love” we can think of, Keiynan Lonsdale set his song “Kiss the Boy” to blissful images of real-life couples across genders and sexualities. He told Billboard he was inspired to write the tune after seeing the first trailer for his 2018 film Love, Simon. “I was thinking about the Love, Simon trailer and I was really happy. Eventually, I got the hook, ‘If you wanna kiss the boy/ Then you better kiss the boy right now.’ … I had so much to draw off, with the movie, my own personal life and every relationship I’d been in and other people’s stories that they’d told me.” Hey, there’s no time like the present.

Melissa Ethridge – “Come To My Window”

Melissa Ethridge’s fourth studio album Yes I Am is her largest selling album to date, and launched her to international stardom. It also happens to be the first one she released after coming out as a lesbian in 1993. Coincidence? You decide. Regardless, “Come To My Window” has cemented itself as an iconic lesbian rock anthem, and not a bad choice at karaoke we might add.

Scottish producer Sophie was already well known by the time she came out as trans. “It’s Okay To Cry” was the first single off her 2018 debut album Oil of Every Pearl’s Un-Insides, and marked the first time she used her own voice and image in her music. In the video, Sophie appears as a soft, vulnerable and heavenly figure. Not long after its release, she spoke about her transition, telling Paper that “transness is taking control to bring your body more in line with your soul and spirit so the two aren’t fighting against each other and struggling to survive,” and the song has come to be interpreted as an ode to being comfortable in one’s own skin. Sophie tragically died in an accident in 2021, but fans will never stop appreciating her willingness to fully express herself in her art.