Hollywood has yet to fully comprehend the mass appeal of queer cinema. Ok, so we just got a lesbian in Power Rangers, and Sulu is supposedly gay in Star Trek Beyond, courtesy of a blink-and-you’ll-miss-it hug. Fortunately, indie filmmakers continue to churn out stories that better develop queer characters and stories.

The films and series profiled here all tell queer-themed stories with technical polish and sensitivity. Whether on the web, or in the art house theatre, all deserve an audience. Maybe someday Hollywood will take note.

Until that time, however, check out these entertaining-to-awesome indie queer outings…

Jane Austen gets the gay treatment with Before the Fall, a modern re-imagining of her novel Pride and Prejudice. Gorgeously photographed on location in West Virginia, Before the Fall takes Austen’s proto-feminist heroine and replaces her with a queer lawyer named Ben. Ben falls for a client he represents in a battery case, and needless to say, his life turns upside down in the process. With a cast led by the attractive Ethan Sharrett (as Ben) and Chase Connor (as his client, Lee), Before the Fall adds some enticing gayness to Austen’s classic.

Before the Fall is available on Amazon, iTunes & VUDU May 15.

Recently married lesbian couple Cat & Liz learn to deal with aging the queer way in Out Again, a new short from director Robin Cloud. As Cat & Liz decide to spend a weekend with Cat’s Alzheimer’s-stricken mother in the country, the two realize they’ll need to come out to Cat’s mom again…and again. Rife with bittersweet humor, Out Again tells a touching story outside the usual plots of queer films, making it an overlooked gem.

Out Again is available to stream now.

This goofy web sit-com revolves around two bestie guys living in New York City, dealing with the perils of single life. In the Odd Couple tradition, one is the gay party boy, and the other, a straight nerd. Together though, they make a great pairing, navigating contemporary boy problems like smartphone dating and if straight guys can find other guys hot. Of course, the two cause a fair amount of ridiculous problems for one another, often paying off with some very big laughs. 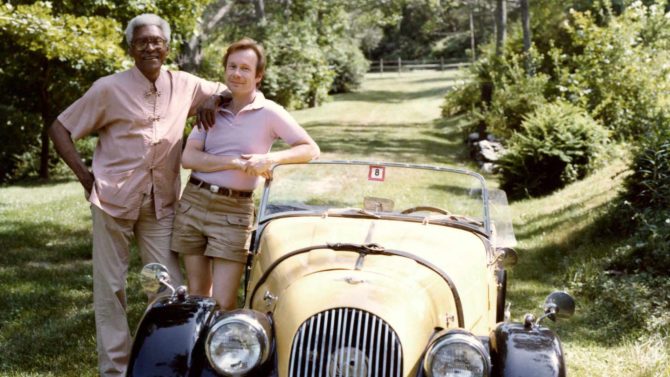 Few students of American history will note the key role of gay activist Bayard Rustin. Once the right hand aide to Martin Luther King, Jr., Rustin masterminded the march on Washington that changed the course of the Civil Rights movement. After parting ways with Dr. King, he went on to find true love with longtime boyfriend Walter Naegle. In this documentary, Walter shares his memories of Bayard, with a twist: in the days before marriage equality, Bayard was forced to adopt Walter to protect their rights as a couple. Harrowing, to say the least, Bayard & Me celebrates an untold love story, and pays tribute to one of America’s unsung heroes.

Bayard & Me continues to play the film festival circuit

This noir-ish thriller follows a sexually questioning, teenage runaway who makes his way to New York City in search of a modeling career. When he arrives, he crosses paths with a former hustler, and finds himself embroiled in a web of pornography and intrigue. Delightfully smutty in a Brian DePalma kind of way, Grinder features two fine performances from hunks Tyler Austin (as the runaway, Luke) and Jon Felming (as the gay-fatale Rich).

Better Half started playing the festival circuit back in 2015, maybe because it was a bit ahead of its time. The film chronicles the relationship of happy couple Tony & Leo (played by hotties Grant Landry and Jaimie Fauth) as they confront a crisis few queer films have yet touched on: fatherhood. Tony wants to have a baby, but Leo doesn’t, and when the two run across an abandoned baby, the couple faces a crisis. Combining the best qualities of comedies like 3 Men and a Baby and Raising Arizona with contemporary queerness, Better Half breaks some new ground for queer cinema with wit and tenderness.

Better Half still plays film festivals, and is in search of distribution for streaming and home media

Produced by Robert Philipson’s Shogafilm this incredible documentary covers the history of the blues through a queer lens, showing how divas such as Alberta Hunter, Ma Rainey, and Bessie Smith created a class of strong independent black women who challenged stereotypes in and out of the African-American community about sex, gender, music, style and power.