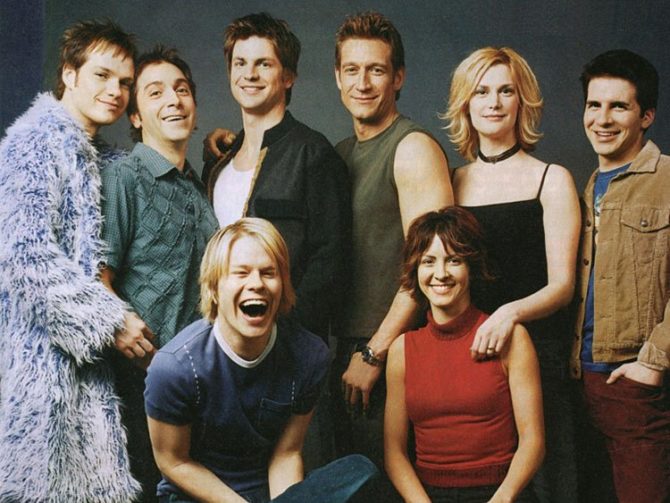 Whether you watched the show chronologically when it first aired in the early 2000s or unapologetically recorded episodes on your parent’s TiVo as a closeted teenager like me, Showtime’s Queer as Folk was a major milestone in LGBTQ entertainment.

Upon discovering the show eight years after the final episode aired, I had never seen anything like it. Throughout its five seasons, the narratives and storylines promoted safe sex, displayed the harms of drug use, highlighted plotlines of gay bashing, and brought to the forefront the importance of same-sex marriage.

And for a hypersexual 15-year-old like me, it also had some of the hottest gay sex scenes on premium cable.

With Peacock releasing its reboot later this week, I decided to rewatch the original American series’ entire first season, which highly captivated my 15-year-old imagination, and dissect those memorable moments at age 25. Like many shows and films of that era, certain elements of Queer As Folk haven’t aged so well. While certain other elements remain timeless.

(Caution: MAJOR SPOILERS AHEAD, but it’s been 17 years since the last episode aired, and if you’re reading this you’ve probably already seen it, so… Oh well, I guess?)

In the pilot episode, viewers are transported to the Babylon, a booming nightclub for the circuit queens of Pittsburg, Pennsylvania, and no, they weren’t serving it ancient city style. Still, the boys with frosted tips and 501 jeans were a serve. We are introduced to the most interchanging yet chaotically synchronous relationship between Brian Kinney and Justin Taylor. These two looked like they came out of an Abercrombie & Fitch advertisement. Either that or a couple from an exclusive video for Helix Studios. Whatever the case, at 15, they were my wet dream come to life.

Rewatching at 25, what’s difficult to swallow is the overall timing of when these two first meet. Justin is a minor. There’s a lot to unpack with the problematic roots of their relationship, but as the show progresses, the characters and even viewers (myself included, at one point) end up rooting for them. Which is… okay… I guess? Regardless, you’re left wondering if the two are kindred spirits, star-crossed lovers, or a product of Stockholm syndrome. You could argue any of these sentiments. I should also note that, at 19, my first boyfriend was 39, and we regretfully share a matching tattoo. So do I empathize with Justin? Kind of. Was I a bigger clown than him? Obviously.

In episode 11, Michael turns 30, which becomes a recurring joke. Apparently at 30, one should bear a scarlet letter on their chest and obtain a lifetime supply of Depends. Truth be told, I was and still am terrified of getting older, and I saw a little bit of myself in Michael both then and even now. We’re both slightly annoying and cautiously indecisive individuals with heavy hearts, and we love a good co-dependent relationship.

To sum up this episode, Michael contemplates getting back together with his hunk-of-an-ex-chiropractor, Dr. David, but Brian gets in between the pair developing a relationship. Michael’s mother and arguably everyone’s favorite TV mom and possibly an Aries, Debbie, then goes to Brian to tell him to release her son from his grasp.

As an attempted goodbye to their friendship, Brian plans a surprise party for Michael that turns into quite a spectacle, leading characters to spiral and get messy while also making great television. I loved watching mess then, and unfortunately, nothing has changed.

During Michaels’s 30th birthday, the show’s softer and likable character Emmett Honeycutt goes through an anxiety-driven weekend due to a voicemail from an HIV testing clinic asking him to return to the facility. Sirens go off and Emmett, who is incredibly mindful of his safe sex practices, believes he may have tested positive for HIV, which comes back negative, and he was asked to come back due to a bounced check. Clownery.

One of the admirable things the show captures is the importance of sex safe. The wide array of sex scenes throughout the series featured the characters using condoms. While rewatching this episode, I realized how it engrained this normalcy of safe sex practices into my mind. Did I follow those practices in my teen years and early twenties? Regretfully no. Does this make me an even bigger clown? Again, yes. But at least I’m self-aware.

Ted and other drugs

Another positive element to the series that made it stand out for me then and even more now was its plotlines regarding the harms of drug use and how the journey with addiction leading to sobriety doesn’t happen in a straight line.

One character, Ted Schmidt, has his first encounter with drugs due to an overdose on GHB, which foreshadows his battle with drug use in the third season. Overall, Ted’s development makes a positive turn reaching him towards the destination of sobriety with thicker skin and an optimistic future.

One of the less toxic relationships on the show was between Melanie Marcus and Lindsey Peterson. As a teen, I didn’t care too much about their storyline, but I wish I did because maybe I would’ve had a more inclination toward what a non-toxic relationship could look like. I see now how their connection was so synchronized, tender, and romantic, yet they shared tension at times. But, overall, I fell in love with them as individuals and their relationship and had small crying fits with a glass of pinot grigio watching their love grow.

A lot occurs in the Season 1 Finale in its 50-minute time frame. The arguable anti-hero Brian Kinney turns dirty 30! Another scarlet letter is marked, and a lifetime of adult diapers is shipped to his tastefully decorated loft. More agist content is bequeathed to viewers, and my fear of getting older grows stronger.

Also in the episode, Brian goes on a sex and drug binge and nearly attempts suicide, which is very dramatic. At the same time, Micheal contemplates moving to Portland with Dr. David. Meanwhile, Ted’s boyfriend at the time, Blake, checks into rehab and leaves on his unfortunate terms. Brian still entertains Justin and later accompanies him to his high school… which is okay?? And finally, the season ends with Brian and Michael in a hospital waiting room after a classmate brutally assaults Justin. Again, a lot happens, and I’m surprised baby gay Joey had the attention span to follow this unraveling.

Though the original American version of Queer As Folk had its impressions and made strides toward seeing LGBTQ narratives in mainstream media, it failed to address the elephant in the room. The series didn’t have any reoccurring characters who were non-cis or POC. And if you were to dissect the term “queer”, you’d realize that there’s a lack of depth beyond the white gaze. However, much like Friends and Sex and the City, Queer as Folk was a product of its time. That said, it encapsulated the importance of camaraderie and chosen familial relationships in such a tender way from beginning to end. The great thing is that this leaves a lot of room for the new series to expand and explore in its characters and plotlines. Though Ron Cowen and Daniel Lipman’s series sets a strong foundation for LGBTQ narratives in film and TV, one could hope that the reboot dismantles barricades as the original once did and patches up the harmful crevices within its foundation… and fingers crossed for more hot sex scenes!