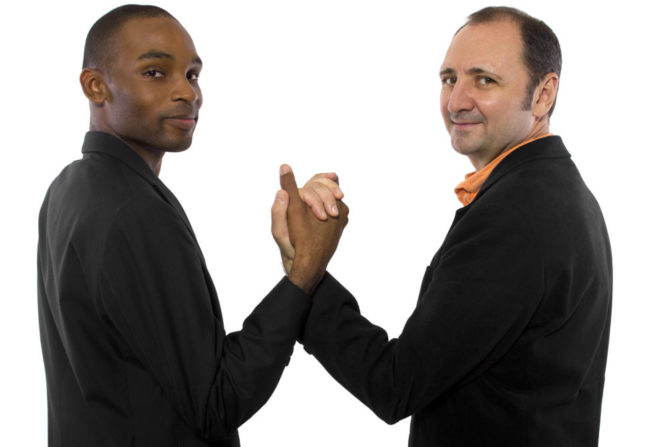 Since everyone gets old–even the youngsters who think it’s a fate worse than death–we thought it was high time to put together a list with some hints about topics to avoid when you are daddy hunting or just hanging with older guys.

Here are 7 things to watch out for…

1. You look great for your age.

Hey, we appreciate the compliment, and your skillful backhand. But when you qualify our age by adding “…for,” it’s kind of like saying “you know, you’re ugly, but taking that into consideration, you’re holding up well.”

Instead, try “you look great at your age,” or, should you want to go back to basics, just stop the sentence after “you look great…” I don’t say to 20-somethings, “you look great… for a kid.” Age is irrelevant but compliments are always in fashion.

2. How come you never got married?

Ugh. The subject of marriage in the gay world is now just as touchy as the subject of marriage in the straight world, but when you ask the question of an older gay man, you’ve made the assumption he grew up with the same rights as you. And you might not want to hear the answer. “I didn’t have the legal opportunity,” “he couldn’t deal with coming out and married a woman” or “I wanted to, but he died,” are just a few of the responses to expect. Instead, stick with the always allowed, “Would you like to get married someday?”

3. Do you mind if we stop for a sec while I answer this text?

Just, no. I don’t care if your generation thinks sexual foreplay involves chatting with your bestie. When you’re with a guy over 40 be with him. There’s nothing that spoils the mood for us than the ping from a must-read message. And don’t even get me started about keeping hook up apps alive and open. And if you date a Daddy who does this to you, be the more mature man and let him know he has some serious growing up to do.

4. You’re too old to be at this bar/club/event.

If you think someone looks silly being in your space, just think how silly you look being the ageist in the room. (“Ageism” is the only –ism in the world that is a bias against your future self.) Even if you think that Daddy in the corner looks more like a chaperone than a peer, let him decide at what age to call it quits—if such a number exists. We should be welcoming all into this thing we call “community,” and we can all learn from different age groups. Most important, discrimination hurts. Everyone reading this has felt hatred’s sting, and let that serve as reminder to never spread it around. Love’s a lot more fun, and it never gets old.

It’s nice when someone else pays, isn’t it? It’s not so nice to expect them to. Just because a man is older than you doesn’t mean the relationship should be financially one-sided—“generous” or “gen” relationships fall into another category. There’s no bigger turn-off than the assumption of cash-flow responsibility, and older doesn’t necessarily mean a bigger paycheck. Treat any first date with an older man like you would with a man your own age, then figure out the finances as things go further.

Yes, I know, this article has “Daddy” in the title, and, personally, I find the phrase endearing—I’m just happy to be called. But not everyone likes it, and you should always enquire first. There’s something presumptuous about those conversations that start with variations of “Will you be my Daddy?” or “What’s up, Daddy?” or even “Hot, Daddy!” They assume we’re going to play your preferred role, and we might very well have different intentions in mind. If you keep things on an equal playing field, you might find a whole world of options opening up in front of you.