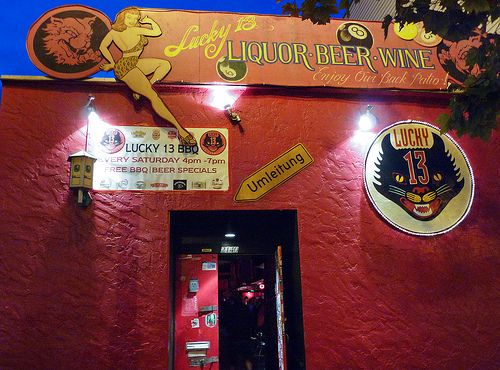 Dive bars have been going the way of the dodo in San Francisco, as rent prices grow steeper and housing scarcer. Now another bar with queer history may likely fall — Lucky 13, situated on Market Street in The Castro neighborhood, is set to be torn down to make way for new housing. The plan has been floating around since last year, but a Notice of Building Permit Application recently posted outside the building calling for demolition suggests it’s moving forward.

According to the Planning Department, developers are seeking to demolish the bar and its patio to build a 28-unit, five-story apartment building with 2,900 square feet of ground-floor commercial space. Each unit would have its own subterranean parking space, according to the permit application.

It might seem like a smart move to squeeze housing wherever it will fit (seriously, the city is in a housing crisis), but many feel the bar holds a history that’s worth preserving, rather than replacing it with what’s almost guaranteed to be another version of the glass-facade condo buildings that have been cropping up all over San Francisco.

Lucky 13 was one of 18 clubhouses for the Woodmen of the World, a fraternal society for woodworkers. An inscription on the bar’s exterior reads “W.O.W 1906,” which is the same year the building was constructed.

The space also ties deeply into the city’s LGBT history; in the 1970s, it was a popular dance club that went through several name changes, including Alfie’s, The Mind Shaft, The Prism, 2140 Market, High Chaparral, The Corral, and The Industrial Dance Company. Supervisor Harvey Milk held meetings at the club, and part of his funeral was held there, said Kreankel.

Neighbors will likely continue to fight the plan by filing applications for discretionary review on the grounds that Lucky 13 is a historic space. That may slow the process down, but the odds don’t look great that the venue will live on much longer.