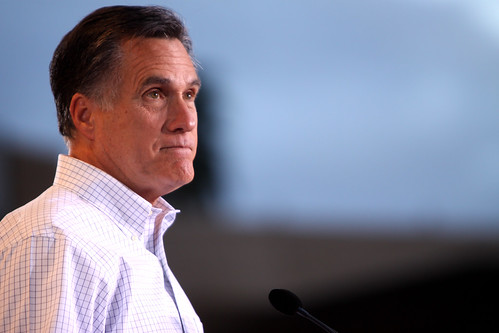 On Tuesday, Mitt Romney had a really bad night. You know you’re having a really bad night when a member of the mainstream media–in this case Michael Crowley from Time magazine-tweets the following about you: “Remember the Simpsons where Homer is only employee who hasn’t won Worker of the Week, and then they give it to a carbon rod? Romney=Homer.”

Looking back from November, we might remember Super Tuesday as the night when Romney could start preparing his concession call to Barack Obama.  Faced with a do-or-die situation for his candidacy, Romney took the middle approach: he didn’t do and he didn’t die. He just inflicted his candidacy with a fatal shot of fecklessness. He lives to limp on to the GOP convention in Tampa, where he has to be the nominee if only because there are no carbon rods available.

Ten states were up for grabs on Tuesday, and the results in most of them were predictable. Romney won Massachusetts, where he was governor, and neighboring Vermont, where cows probably outnumber Republicans. He also won Idaho, because of its large Mormon population. But in Ohio, the state where it most mattered, both for Tuesday and for election day in November, Romney could not deliver the knockout blow he needed to stop Rick Santorum, a candidate whom he outspent by several orders or magnitude (6 to 1 or 12 to 1, depending on how self-pitying Santorum is feeling). The narrow margin between the two candidates is an embarrassment for both of them: for Romney, for proving once again he is not a man of the people, and for Santorum, for blowing a huge lead.

Still, Santorum had a strong enough showing to prove he is the only credible (if that’s the word for another GOP extremist) alternative to Romney. Santorum won Tennessee, Oklahoma and North Dakota, enough to generate a bit more money for his anemic coffers. The next round of voting is in states like Kansas, Mississippi and Alabama, places that are far more amenable to Santorum’s social messages than to Romney’s attempts to prove he’s really a conservative despite his moderate record. Newt Gingrich won his own state of Georgia, as well as the title of Candidate We Are Most Likely To Forget Is Still in the Race.

What the GOP primary has become is the modern day political equivalent of the Battle of the Somme–an endless bloody slog where successes are measured in yards, not miles, and in the end victory is hollow. A recent ABC News/Washington Post poll shows that the extended primary is driving up the unfavorable ratings of all the GOP candidates. For a candidate like Romney, whose image is rapidly becoming fixed as the clueless wealthy guy, a longer primary season is a potentially fatal development. People may have a pretty good idea of who they think Romney is long before he gets to introduce himself as the GOP presidential nominee.

There’s probably at least another month of party self-destruction still to come. Given the fact that Santorum relies most heavily on religious conservatives for votes, he needs to motivate them if he wants to succeed. That means more red meat of social issues. The contraception controversy the Santorum helped spark has been cast as a signal that social conservatives object to women having sex outside of marriage. This is true, as far as it goes. (Ask Rush Limbaugh.)

But the real issue isn’t about the gender. It’s about the sex. Santorum and his allies have a unified view of the sexual universe, and straight premarital sex and all gay sex are just variations on the spectrum of immorality (even if they are pretty different to you and me). So don’t be surprised if gay issues re-emerge as a theme in the campaign yet again. After all, you may get flak for attacking women, but not nearly as much for attacking gays.

broke as a joke

broke as a joke