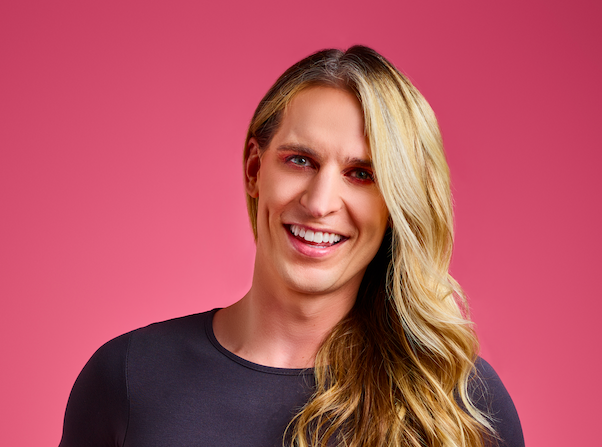 Jason June (like Mary-Kate) identifies as a “genderqueer mermaid.” But he’s sooooo much more than that. He’s also a dog mom…

Over six years of being a dog mom and it's still so wild and disgusting how proud I get of my little guy every time he poops ??

I can’t stop thinking about getting Heidi Klum bangs and I need y’all to talk me out of it before I do something drastic!! ????

My debut YA novel about gay hopes and dreams and love and sex and hormones and relationships is out TODAY!! JAY’S GAY AGENDA is such a piece of my rainbow heart that I hope shows just how beautiful and exciting and layered it is to be queer. HAPPY PRIDE! pic.twitter.com/JnzMJBqHAZ

Queerty had a chance to chat with Jason June about the book, being queer, his own personal gay agenda, and that time he was kicked in the head by Kylie Minogue. Here’s what he had to say…

QUEERTY: First things first… Tell me about the time you got kicked in the head by Kylie Minogue.

JASON JUNE: This is a moment that I will never ever ever forget! I was an extra in the “All the Lovers” music video, the one where we’re this mountain of writhing bodies. So the group was lifting Kylie up to the top, and when she was flipped around to be put in this fabulous diva position, she knocks me in the face with her heel. She was so so so so so apologetic and sweet and checking to make sure I was okay. I totally was, and there wasn’t even a mark because I’m sure she has magic heels or something. She probably doesn’t remember this because like, I’m a nobody, but I felt like I was blessed in that moment!

At Queerty, we’re all about the gay agenda. Coincidentally, your debut YA novel Jay’s Gay Agenda was just released at the beginning of this year’s Pride season. What has the response been like so far?

It’s been so great to hear from people who relate to Jay, who mention having gone through the same experiences or are currently going through some of the shenanigans Jay gets up to when he’s finally seen as a romantic and sexual being for the first time. That’s the whole reason I wrote this, for their to be connection with teens and young adults who are in similar situations to Jay as the only out queer kid in their community who suddenly get thrown into a very gay space. It can be overwhelming, you can make mistakes while dating around for the first time, but overall, I hope readers feel how magical that time is too, when you finally get to be gay.

What has been the most unexpected reaction you’ve gotten?

This is a book about getting to date for the first time, before locking yourself down in a relationship but still finding people who think might become a great first partner, and I honest-to-goodness never thought that Jay would be labeled a cheater, but some readers do. Jay never promises fidelity or boyfriendship to any person he dates, but he doesn’t share that he’s dating other people. I think we can and should say that he’s lied in those instances, and that’s a huge no-no, but I wouldn’t label it cheating. I think there’s a big distinction there, and there’s a theme that I’m exploring about lying to save someone’s feelings and how that almost always ends up hurting someone worse than if you just came out with the potentially rough truth from the start.

I think it’s so common for teens who are dating around to not necessarily share all the facts about who they’re dating to all their romantic interests and just let any trysts fall to the side when they’ve finally decided to be in a committed relationship with someone. I’m not saying it’s right to lie by omission in the slightest. But I do think it’s a human mistake, and to label those people as cheaters or bad people is too harsh in my opinion, especially when they realize how they’ve screwed up and try to make things better. At the same time, I definitely would never say readers can’t feel how they feel, because their life experiences and viewpoint might be different than mine but that doesn’t make them wrong by any means! And I’m very appreciative to anyone who’s read Jay’s story!

The book has been described as a “hilarious sex-positive teen rom-com about the complexities of first loves, first hookups, and first heartbreaks.” I listened to the audiobook version and, I gotta say, that’s a pretty accurate description. It’s instantly relatable and funny and down-to-earth and just fun. I’m curious how much of it is autobiographical?

First of all, thank you so much for listening! Isn’t the narrator, Mark Sanderlin, incredible? I think he did such a great job capturing Jay’s energy. As for how much is autobiographical, there are a few seeds from my real life that started Jay’s journey. We were both the only out queer kid at our rural eastern Washington high school, and while I didn’t have a list/gay agenda of all the things I wanted to do when I finally met another gay person, I did have a diary where I detailed everything I wanted to do romantically and physically. But from there, other than the fact my gay awakening was also in Seattle, our stories really diverge. For starters, I ended up throwing my diary away before I came out because I was afraid someone would find it and out me before I was ready. So in this story I wanted to embrace Jay’s gay agenda and his hopes and dreams and make it all about queer joy and feeling the magic of finally getting to be your gay self when you’ve been physically separated from the LGBTQ+ community your whole life.

As you just mentioned, in the book, Jay creates a list of things that make up his gay agenda. What are five things on your own personal gay agenda?

Ohmigawd I love this! Okay so here we go:

1. Continue to make novels with queer main characters for the rest of time.

2. Keep having relationship milestones with my husband. We just hit ten years together, four of them married, and this is the love story I was told could never happen as a kid, so it’s just so heart-boosting every time we hit another year together.

3. Like, really truly learn how to do eye makeup (I’m getting better, but I need to get good).

4. Be one of the first genderqueer panelists on a daytime table talk show.

5. Get kicked by Kylie on the other side of my face so my soul is cosmically and diva-ly balanced.

You identify as a “genderqueer mermaid.” When did you first start embracing your genderqueer identity? How did your family respond?

I didn’t really unlock my genderqueerness until two years ago when I turned 32. I came out my senior year in high school, and then after moving to the gay paradise of Weho in my early twenties, I thought everything would be rainbows and roses from there. But I still felt so unsure of my personhood, and realized the more I tried to fit into the mold of “perfect gay man”, the worse I felt about myself. But when I started embracing my femininity inwardly and outwardly, I finally felt like me. And it’s that femininity, plus a few heart things that are for me, that helped me discover genderqueer was the term that best describes me. My family has been so supportive, and it’s been great that the people closest to me in my life see how much more me I am by expressing this part of my gender.

A while ago you posted a side-by-side photo of yourself from 2009 and 2019 to Instagram along with the caption, “I look exactly the same.” When you look at the photo of that person from over a decade ago, what do you see today? And what would you like to say to him with 10+ years of hindsight?

I look at 2009-me and see a person who was so insecure and looking for validation in all the wrong ways. I needed people to say they liked/loved/wanted me because I didn’t like/love/want myself. I felt like I was trying to be what society—both straight and queer—said a gay, biologically-male person should be, and so much of that did not connect to what was in my heart. On the flip side, I look at 2009-me and I’m so proud of how far I’ve come and can appreciate my journey and respect that I still don’t have everything 100% figured out. So I’d say to me-10-years-ago, “Just breathe, lady.” Explore the parts of yourself that you’ve been afraid to let loose, grow your hair out now, stop worrying about dating people who only care if you’re masc (spoiler: you’re not!), throw on a pair of heels and just bask in your femme-self.

Last question: What’s something about yourself that many people don’t know?

I pretty much stopped reading in high school unless it was for school. I think a lot of people assume that authors always read their entire life. I read like the wind from about 7-13, but after that, I stopped until my mid-twenties. I think it had something to do with not seeing myself in books, only seeing straight characters, and even before I acknowledged to myself that I was gay, I was not connecting with these protagonists. Which is all to say, representation matters! Yay!

Spanish rapper Arkano comes out, says he’s “open to everything.” Now, about his Tinder page…

The Myth of the Good Body

Trans guys struggle with eating disorders. Nobody talks about it.

all in the fam

We’re head over heels for these incredible, queer parents

Trump Tower appears to be headed toward a similar fate as Trump’s failing D.C. hotel