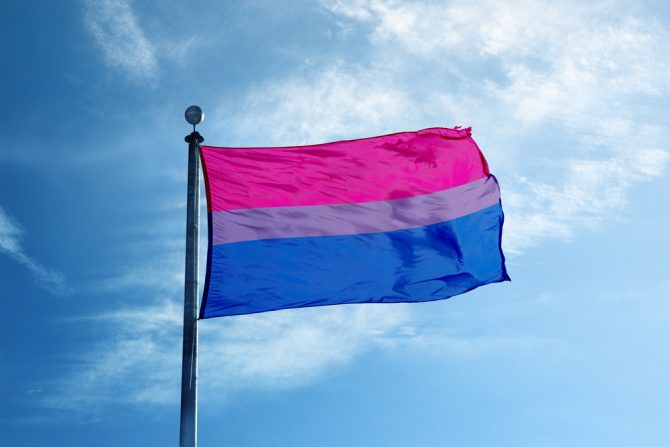 In GLAAD’s Accelerating Acceptance 2017 report, we found that 20% of millennials identify as something other than cisgender and heterosexual. While I shrug off the label of “millennial,” because I’ve heard a range of answers about what generation I am technically a part of, I am proud to be associated with a group of people who are pushing boundaries and making the world a safer place for all identities.

A common misconception about bisexuality+ is that it means that you are only attracted to men and women (typically assumed to be cisgender men and cisgender women). This is untrue. Bisexuality+ means that you have the capacity to be attracted to genders like your own and genders unlike your own. There is no inherent binary to a bisexual+ (bi+) identity, and I am the proof of that as someone who is bisexual+ and nonbinary.

For me, while I have pride in my nonbinary identity, I generally just don’t care very much. I recognize the privilege of this sentiment: I was raised in a supportive family, in a supportive town, in a supportive state (Massachusetts), and in a supportive political era (the Obama administration.) When I was educating myself – and being educated by people I met – about the vast depth of LGBTQ identities, I came to the realization that I believe that gender is a social construct. From that, I explored terminology further, and concluded that I identify as nonbinary.

Nonbinary can have a range of definitions, but is typically used by people who experience their gender identity as falling outside of the categories of man or woman. What’s most important is to listen to a nonbinary person’s own descriptions of their identity. My nonbinary identity means that I don’t identify within the gender binary at all: I am not somewhere between male and female, I reject the gender binary completely.

When I started writing this piece, I planned to explore the intersection of my nonbinary identity and my bisexual+ identity. However, I often find myself having a greater ease and around discussing my nonbinary gender identity than my bisexual+ identity. When talking about my nonbinary identity, I more or less know the beats to hit: “gender is a social construct,” “I reject the gender binary,” and “as someone who was assigned male at birth, I have a level of privilege, as well as a need to fight back against erasure.” When it comes to bisexuality+, I don’t necessarily have the same type of consistently personal narrative points to hit.

Through my work at GLAAD, I keep a wide variety of bi+ talking points in my back pocket to pull out at any point: “Bi+ people make up the majority of the LGBTQ community,” “Bi+ people face higher rates of intimate partner violence, mood disorders, and economic inequality,” and “Bisexuality+ is no more inherently transphobic than gay/lesbian or straight identities.” But these are all just that: talking points and quick facts to be expanded upon. There’s very little of me in these.

And maybe my reluctance to talking about my bisexual+ identity comes from the lack of bi+ -specific spaces to exist. We are shown from young ages that heterosexuality is “the norm,” and queer identities make us feel like we are different, or even shameful. Thankfully, LGBTQ organizations like GLAAD have done an incredible amount of work to accelerate acceptance, and now non-straight people who identify as gay or lesbian are significantly more able to come out safely and live openly (over 70% of gay and lesbian cisgender people are out as gay or lesbian to their loved ones.) However, bi+ people like myself are still waiting for that acceptance —and understanding —to reach us. Only 28%of bisexual+ cisgender people are out to their loved ones. That needs to change.

Non-bisexual+ people often seem to struggle with understanding bisexual+ identities. I enjoy being in a position where I have opportunities to explain the wide range of bisexual+ identities because of the expertise I have gleaned through my work at GLAAD,but there is still often a part of me that questions the widespread phenomenon of people misunderstanding bisexuality+. Why is it considered more “normal” and expected that someone, through the course of their life, be attracted to people who only carry some very specific, very gendered characteristics. Beyond that, it is still widely considered “thenorm” that people will only be attracted to people with certain specific genitals throughout their entire life. This assumption is dangerous towards transgender and gender-nonconforming people, as well as for people who are intersex.

I do feel a level of pride to exist as a bisexual+ person in a world where it is not necessarily easy to have a bi+ identity, and I do also feel proud, nearly joyful, to also exist as a nonbinary person. I hope that someday I will feel more equipped to talk about my bisexual+ identity from a personal lens, and I hope that other bi+ and nonbinary people are allowed the opportunities like the ones I have had. For BiWeek this year, 20biteen, I hope we can all commit to sharing our stories—and that those who hear them will truly listen.

Mackenzie Harte is the Coordinator for the GLAAD Media Institute.

Throughout #BiWeek, allies and bi+ people learn about the history, culture, community, and current policy priorities of bi+ communities.