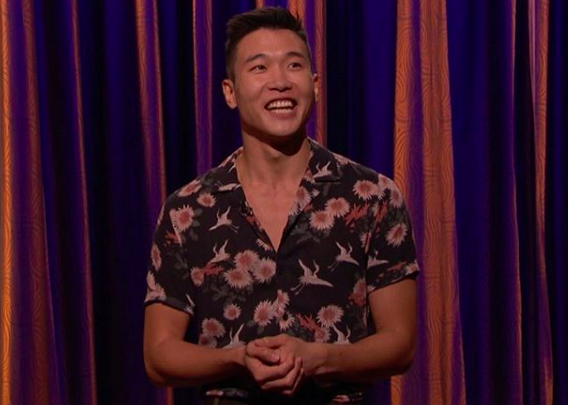 Comedian Joel Kim Booster has been making a name for himself with appearances on The Late Late Show with James Corden, Conan, Netflix, Comedy Central and more, as well as with his brutally honest, absolutely hilarious observations about gay culture, which he regularly shares with his 60K followers on Twitter:

I hope Pete Buttigieg’s campaign slogan is written like a Grindr bio. “? to be President but would settle for VP if it gets there ?? I’m only human ?. Face pic to chat ????”

A lot of people love to say things on the apps like “just living life” as though there is any other option oh my god is there another option?

I’ve been sexually rejected by both the managers at my Equinox at two separate warehouse sex parties and that’s the kind of motivational trauma I simply cannot find at a Crunch or Gold’s!

Now, he’s sharing more of that brutal honesty on the Advocate’s podcast LGBTQ&A, where he recently sat down to talk about a wide array of topics, ranging from his race to his penis, two things that are often conflated.

“The inherent assumption in ‘I’m not attracted to Asian men’ is that we all look the same or there’s an innate quality about Asian men that you cannot separate,” Booster says.

“Let’s be real, that’s the thing behind ‘No Asians’. Saying ‘I like a guy with a big dick who’s masculine, who’s muscular, who’s XYZ.'”

He continues, “All of the things that are not associated with Asian men typically in terms of the stereotypes we see in the media and elsewhere. But there are Asian men that exist who would check those boxes.”

Then there’s his penis, and the stereotype that Asian men aren’t as well-endowed as men of other races. Booster says “it’s a real weight” he’s carried for years.

“I feel this weird relationship to my dick,” he explains. “I love my penis. It is great and gorgeous, but there is this moment every time before I whip it out that I think, ‘Am I the first Asian penis that this person is going to see in a hookup? Am I gonna measure up? Is this going to meet expectations? Fall below expectations?'”

Having that sort of pressure, Booster says, “will truly drive you nuts.”

One of Booster’s biggest frustrations with the gay community is feeling excluded because of the stereotypes attached to his race.

“Sometimes you interact with someone whose entire view of your self-worth is wrapped up in f*ckability,” he says.

“No matter how I force my body into a shape that’s more in the zeitgeist of gay male desire, I will always be a little bit apart from that world because of my race and because of perceptions about my race.”

He continues, “I’ve accepted it, but it is tough sometimes to be introduced to somebody and just have them look through you and you know exactly why.”

Scroll down for more pics from Booster’s Instagram page…

Truly honored to be both the oldest AND least famous person in @wsjmag Young Hollywood Portfolio! ?: @colesprouse, who is the definition of a mensch and made me feel like the most interesting man in the world the whole dang shoot which was absurd considering he is actually Jughead??? Styling: @stella_greenspan (goddess) makeup: @tracyraffelsonmakeup (queen) @polkinghorn @specialprojectsmedia

It’s a little-known maritime law that whoever you eat your first meal with on the gay cruise becomes your best friend for the week and I feel very lucky that I got assigned this lil pizza rat. He was the best wingman, confidant and nurse a boy could ask for and on this Valentine’s Day I honor him! God bless @comicjimdavid for capturing our true essence (completely sober yet somehow still shiny).

Leather Jughead and the Cursed Swing from the OBC of Damn Yankees.

Register to vote or all this ends.

Today’s the day! My album MODEL MINORITY is now out on iTunes/Amazon, etc. for you all to scoop up. Here’s one of my favorite shots from my cover shoot with @withreservation and @4stwu. Fun, right?

We bought a beach.

I love to pose and smile. ?: @yocoland