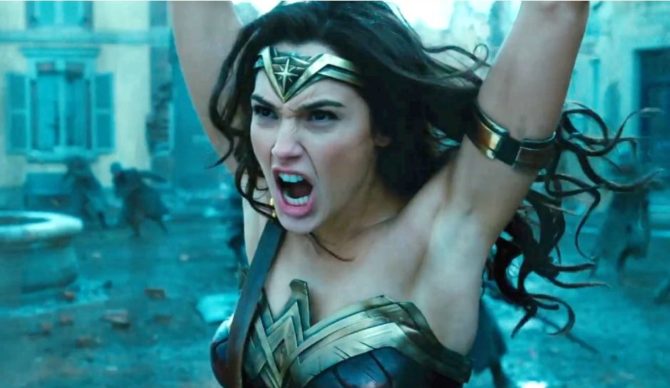 Fans have had their fingers crossed ever since it was announced Wonder Woman would take its turn as the latest big-budget super-franchise, hoping it wouldn’t struggle with the same lackluster pitfalls as some other recent DC ventures.

There aren’t many female superhero leads — even fewer with queer roots as deep as Wonder Woman’s — so it seemed especially important that the studio didn’t, in the immortal words of RuPaul, f*ck this up.

Well with an early score of 93% on Rotten Tomatoes, Patty Jenkins’ Wonder Woman is set to be one of the best-received super hero movies ever produced, and a markedly different direction for DC. In fact, Variety‘s Andrew Barker described it as “a welcome respite from DC’s house style of grim darkness — boisterous, earnest, sometimes sloppy, yet consistently entertaining — with star Gal Gadot proving an inspired choice for this avatar of truth, justice and the Amazonian way.”

Here’s a taste of what others have been saying:

“‘Wonder Woman’ is smart, slick, and satisfying in all of the ways superhero films ought to be. How deliciously ironic that in a genre where the boys seem to have all the fun, a female hero and a female director are the ones to show the fellas how it’s done.”

“Gadot gives Diana the dignity the role calls for, imbuing her with graceful nobility in the film’s biggest fight scenes. But it’s in ‘Wonder Woman’’s quieter moments, like the disconnect Diana experiences between WWI-era London and Themyscira, or her soul-shattering realization that good and evil are more nuanced than myth makes them out to be, that really show off Gadot’s understanding of the character.”

“It says quite a lot about the general tenor of the DC cinematic universe that a film set in the trenches of WWI, with a plot revolving around the development of chemical warfare, is nonetheless its most cheerful and kid-friendly entry. But while ‘Wonder Woman’ may dabble in moments of horror, it never revels in the vicissitudes of human depravity quite like its predecessors. A huge factor in its ability to convey a note of inherent goodness lies in Gadot, whose visage radiates dewy-eyed empathy and determination — and whose response to the iniquity of human nature isn’t withdrawn cynicism but rather outrage.”

“‘Wonder Woman’ is as much about a superhero rising as it is about a world deserving of her, and Diana’s hard-won insistence on battling for humanity (no matter how frequently they disappoint) adds the kind of gravitas and emotion that establishes it as the very best film the DCEU has made yet. There’s only one word for it: wonderful.”

“Perhaps there were too many rewrites and personnel changes (director Patty Jenkins was drafted in after the first choice left; while all five credited writers and eight of the 10 producers are male). Perhaps DC struggled to find territory arch-rivals Marvel hadn’t already claimed. They covered the mythical-deity-out-of-water angle with Thor, and the superhero-joins-the-war-effort with Captain America. In Wonder Woman, they had something none of their rivals had – a bona-fide brand-name female superhero – but in trying to work out what to do with her, they seem to have lost their way. She journeys from a land without men and winds up stranded in no man’s land.”

“Had it really broken the mold and come in below the two-hour mark, ‘Wonder Woman’ could have been a thoroughly transporting film. As it stands, it’s intermittently spot-on, particularly in the pops of humor and romance between the exotically kick-ass yet approachable Gadot and the supremely charismatic Chris Pine as an American working for British intelligence, the first man the Amazon princess has ever met. With eager fans unlikely to bemoan the film’s length or its lapses in narrative energy, ‘Wonder Woman’ will conquer their hearts as it makes its way around the globe.”

“Diana, with her fantastical Hellenic backstory, has less explicitly patriotic roots than the military-created Captain America, but in ‘Wonder Woman’ she serves as an affecting riff on American ideology anyway: She’s a well-intended but naive interventionist, an outsider crashing into a political quagmire she doesn’t really understand but is certain she can fix anyway, sure the solution is as simple as the correct baddie getting killed off.”

“Diana’s scenes of action are thrilling precisely because they’re meant to stop war, not to foment it; the idea of a demi-god using love to fight war might sound goofy in the abstract, but Jenkins make the concept work. When Diana storms across No Man’s Land — a nomenclature given a whole new meaning in this context — to pacify a German foxhole, I got chills: Not the whoosh of recognition of some moment from the long-running comics or from the iconic TV show, not the amusement of some ironic undercutting of old-fashioned heroism, but the genuine charge that great pop entertainment provides.”