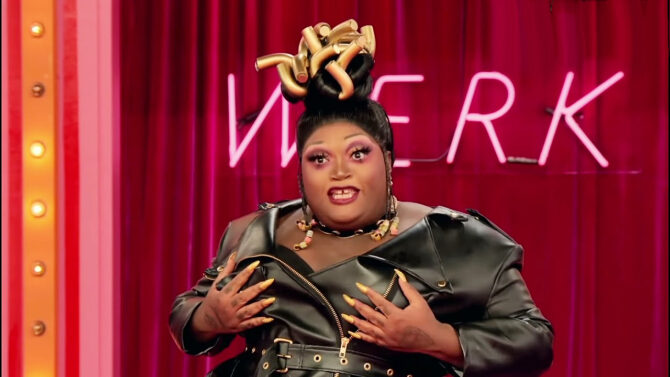 You know what they say: When one bakery closes, another one opens.

An early favorite to take the crown in the 14th season of RuPaul’s Drag Race, Kornbread “The Snack” Jeté burst into the Werk Room a star, though her time in the competition was cut short due to an injury sustained while filming.

Since then, fans have been speculating what was next for the breakout—will Kornbread return to compete in a future season, or maybe even All Stars?—but the LA-based performer just revealed she has other plans that don’t involve drag at all.

On the pink carpet for the Drag Race season 14 grand finale in Las Vegas, Kornbread shared with NBC News that she wants to take some time to focus on her transition, and to continue working toward her acting career.

She added, “I enjoy drag—I don’t think I’ll be doing drag for too much longer. I give myself a good three years probably, tops, because I want to focus 100% on transitioning and 100% on the career I’ve just started, which is musical theater and acting. So drag just did what it need to do, and give me that outlet that I needed.”

This season of Drag Race proved to be a groundbreaking one in terms of representation, with five trans drag performers among its cast. While some of her sisters talked openly about their journeys on the show, Kornbread told NBC that she wasn’t quite ready to talk about it in such a public forum.

“I do say, the people who came out on this show were a lot stronger than I was at the time,” she said. “I did everything after the season was done because I was afraid to see all of that [come] to light before I talked to family or whatever.”

“But to be in such a high-pressure competition, and to come out as Trans on top of the pressure that’s already there, it’s a lot… I just commend them. There’s some strong-ass human beings on that show.”

During the recent cast reunion, Kornbread revealed that her time on Drag Race gave her the strength to talk with her family about her transition and that they’re on good terms after a rocky past. Coming out after filming was just the first step in a longer process for the star, but she’s eager to put in the work and begin the next chapter of her life.

Whether or not she continues to dabble in drag in the future, there’s no doubt that Hollywood will be waiting for Kornbread whenever she’s ready for it. She already racked up a number of acting credits prior to her time on Drag Race, including frequent collaborations with viral video creator, Brandon Rogers, and next she can be seen in Disney’s long-anticipated Hocus Pocus sequel, in which she’ll play a drag queen version of Kathy Najimy’s Mary Sanderson.

Maybe she can try her hand at a music career, too–after all, that Talent Show performance has been in our heads all year long. And, hell, why stop there? Let’s get Kornbread an EGOT! This star’s just gassing up the stove, and we can’t wait to see what’s next.

bottom of the barrel
33