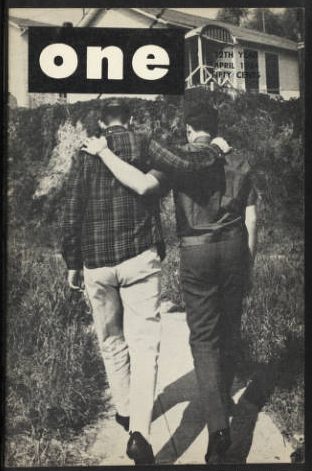 This is the seventh in our series of ONE magazine cover stories.

Volume 12, Issue 4: On Life and Art and the Homosexual

In this lyrical and culturally scorching essay, Bob Waltrip muses on the gay man’s existential condition — which in some ways echoes the general human condition:

I have often heard the cry, “But nobody understands.” Unfortunately, this is entirely true. Dear reader, nobody — absolutely nobody — understands you, and nobody ever will. You can live with another person all your life and he still won’t completely understand you. You can talk to a psychiatrist for twenty years and even he will not entirely understand you. Your parents never understood you, your friends have never understood you, and God himself probably never fathomed your mind. In order for another person to understand you, he has to shuck off his own problems and live your life for you inside your body. This is impossible, so it is impossible for anyone else to really understand. The best thing you can do is try to understand yourself.

Waltrip is also realistic about what a gay man could expect from the majority of his neighbors and acquaintances:

After you understand yourself, accept yourself for what you are and love yourself. But never, never make the horrible mistake of trying to make the heterosexual world accept you as well. It is not yet possible to ask Mrs. Bluelip down the street to accept you as a homosexual. She will accept you on a thousand other terms — if you’re that nice Mr. Jones who raises gardenias and dresses so well. This is what you must work with — dress well, raise gardenias, and be friends with her. After you are very good friends she might come to a realization of your sexual proclivities. But I would never recommend that you come right out and tell her.

… The homosexual wages a continual battle, and wears a disguise that is only discarded during those rare moments when he is alone with another man, making love to him. Only then can he be himself. He is not a fictional character. He is not a strong character. He is an extremely frail and complicated thing called a human being. And he is also my brother. And I love him.

We wish we could show Mr. Waltrip an episode of Queer Eye, in which even the most prim neighbors understand and accept, or take him to a Pride parade where hundreds of thousands of allies march in the streets.

We think he’d be glad to see how much love there is to go around these days.