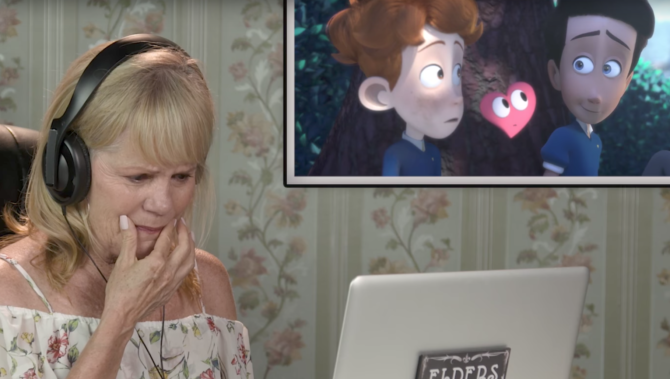 Tear ducts everywhere welled up last week when the full four-minute In a Heartbeat animated film was released online.

Created by Beth David and Esteban Bravo, two animation students at the Ringling College of Art and Design in Florida, it tells the story of a closeted boy who “runs the risk of being outed by his own heart after it pops out of his chest to chase down the boy of his dreams.”

Ugh. Even that one-line synopsis initiates a wave of feels.

If you haven’t seen it yet, stop what you’re doing and watch right now:

With all the myriad problems we have today, some seemingly insurmountable, it is absolutely amazing that this film can exist. It’s even more incredible that it might help young minds — straight or gay or bi — understand that being queer is OK.

A mere fifty years ago it would have been seen as dangerously subversive and immoral.

So how might older people, who’ve seen how far gay acceptance has come firsthand, react to the cute AF short?

Well, here are elders reacting to In a Heartbeat:

Special shoutout to the person who points and says “Haters! Haters! Stop it!” when the other children look on disapprovingly.

Giving her overall impression of the short, one woman says, “It would make a little boy who feels warmly about another little boy feel better to see this.”