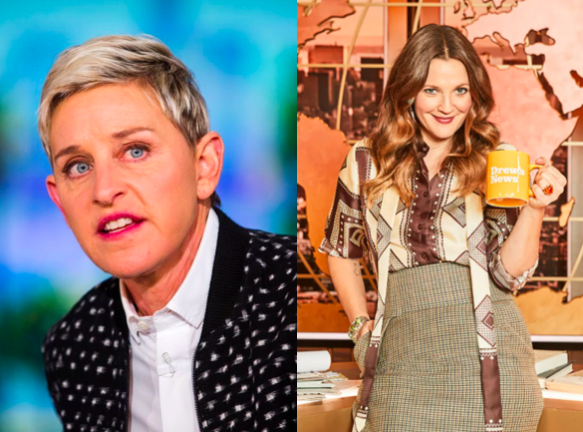 As if she didn’t have enough things to worry about, embattled daytime talk show host Ellen Degeneres may have yet another problem on her hands and her name is… Drew Barrymore.

The 45-year-old actress launched her new talk show on CBS this week and people are already saying she may have the potential to knock Ellen off her throne as the reigning queen of daytime talk shows.

Bye Bye Ellen …. Drew Barrymore is in the house. Like totally. pic.twitter.com/e3BZetT6bC

There’s now a new alternative. On Monday, Drew Barrymore premiered her new eponymous talk show, The Drew Barrymore Show, with a star-studded reunion of her Charlie’s Angels costars, a heartwarming charitable act, and enough sunny warmth and perceived authenticity to rival even the most vintage DeGeneres segment.

the gay community has moved past the need for The Ellen Show, as we now have The Drew Barrymore Show. pic.twitter.com/FWyAq2kOly

Drew Barrymore replacing Ellen was not on my 2020 bingo card but I will take it. https://t.co/I3sRsZDreK

The Drew Barrymore show is going to be everything Ellen wasn’t!

I’m here for Drew Barrymore being the Glinda the good witch of daytime TV. Ever since Ellen got canceled (may she rest) daytime has needed a new beacon of positivity to usher us into a new decade. ????????

Drew and Ellen have had a complicated relationship over the years, dating back to 2014 when Ellen called Drew “fat” when she was actually pregnant. Drew later said she didn’t take any offense to the joke, but the tabloids still had a field day with it.

In 2017, the two briefly worked together on the NBC series First Dates. Ellen served as executive producer with Drew narrating. The show lasted just eight episodes and was canceled after the two purportedly found it difficult to work with one another.

“Ellen and Drew are a case of oil and water,” a source told In Touch Weekly shortly after the show was canceled. “Ellen expected to be the one calling the shots, but Drew thinks she should have creative control because she’s the movie star people are tuning in to see.”

Related: Ellen DeGeneres show is back in business; “And yes, we’re gonna talk about it”