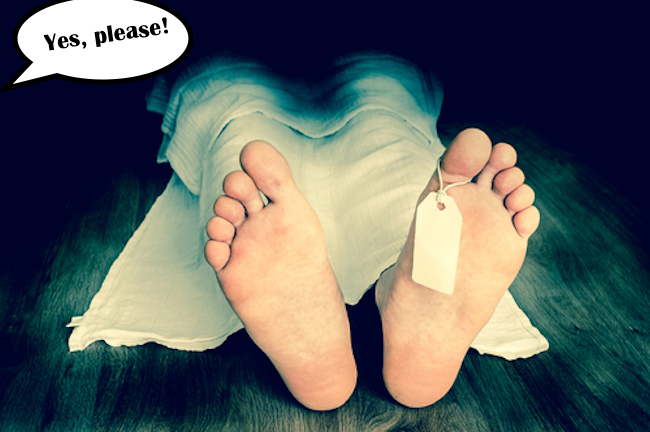 Attention, nurses of the world: It is officially never, ever okay to check out a dying man’s penis.

To emphasize this rule, The Denver Health Medical Center in Colorado just came down hard on five nurses, each of whom took turns sneaking glances at a dying man’s genitals before no doubt exchanging voluminous tee-hees.

According to Hornet, they continued “to look even after he died.”

No official word on what made this dead man’s penis so gasp-worthy, but our correspondents are investigating.

The nurses weren’t fired for their ogling, but they were suspended, and the hospital’s press office worked hard on the following prepared statement:

Their actions, which violated our policies and our Code of Conduct, were promptly reported to appropriate governmental authorities, including the Denver Police Department and the Colorado State Board of Nursing. An internal Denver Health investigation resulted in disciplinary action against all those responsible for the incident and the patient’s next of kin was notified.

According to Denver District Attorney’s Office spokesman Ken Lane: “[Police] determined there was insufficient evidence to prove a crime was committed.”

No charges were ultimately filed.

Hospital spokesman Josh Rasmussen says each nurse was doled out “serious” discipline including “a notice of the discipline placed in their personnel files.”

No word on who caught the five nurses openly leering at a corpse’s magnificent cock.

“Denver Health is truly sorry this happened. This incident it is not an appropriate representation of the high-quality care and compassion our clinical staff strive to provide to our patients.”

According to The Daily Caller, the exceedingly well-endowed man endured all the ogling while all scrunched up inside a body bag.

Because he was dead.