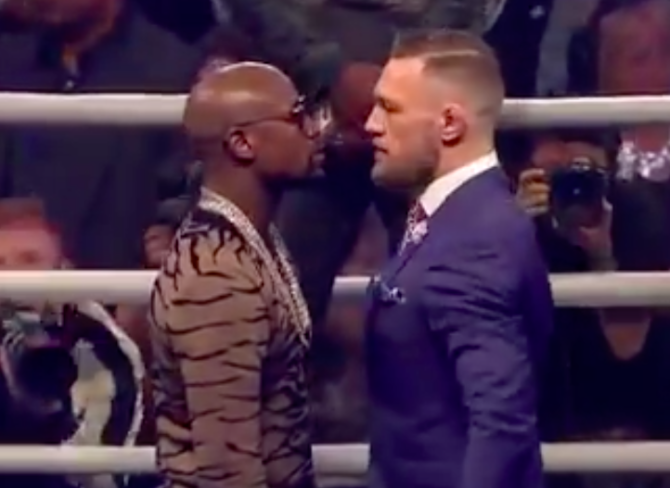 So in case you haven’t been paying attention, boxers Floyd Mayweather and Conor McGregor have been on a sort of disastrous world tour to promote their upcoming match.

The fighters were finishing up their last press event in London earlier today when Mayweather grabbed the mic started shouting insults at McGregor. He called him a slew of names, including bitch, p*ssy, punk, and ho.

But why stop there? Mayweather also threw in a homophobic slur. You know, just because.

McGregor responded by flicking Mayweather off. Meanwhile, the audience erupted into a chorus of cheers and boos.

Mayweather calls McGregor a ‘faggot’. Not cool. Not cool at all. #MayMacWorldTour

It's in London. He meant a pack of cigarettes. RT @ItsPaoloni: Floyd Mayweather just called Connor a Faggot wow pic.twitter.com/YXFPTNAmVr

Floyd Mayweather screams homophobic slur towards Conor McGregor. His speech was lame already, but now it's just getting sad again.

It's like Floyd Mayweather saw how bad McGregor was yesterday and said, "nah, I can do worse."

The slur came just a few days after McGregor told Mayweather during a different press event to “Dance for me, boy!”, rehashing the old racist term used against Black man.

Now that they’ve reached the end of their joint world press tour, the fighters won’t meet again until the week of their big fight in August. Sounds like that’s probably for the best.