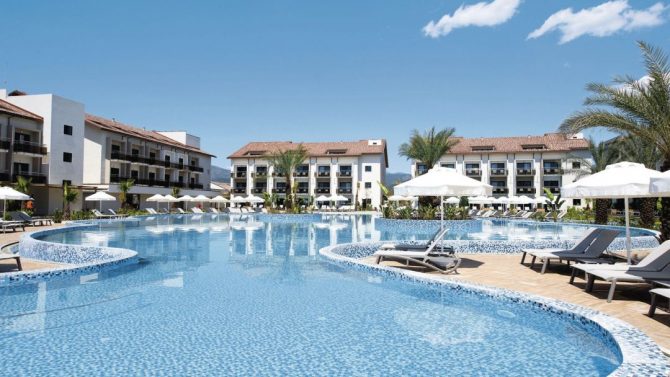 A man and his partner are speaking out after they say they suffered homophobic abuse while staying at a luxury resort in Turkey last year.

David and his partner tell PinkNews that they were booked at TUI Sensatori Resort Barut Fethiye, Turkey last October when they had an altercation with the straight couple staying in the room next to theirs.

The incident happened on October 15, 2019. David says the couple next door kept having “very loud sex” night after night. When his partner finally asked them to keep it down, they lashed out at him. To make matters worse, hotel staff did nothing to intervene.

David initially complained to hotel staff about his noisy neighbors a few days into the trip. They assured him the couple would be asked to quiet down. But the next day it happened again.

“This time woman screaming so loud it was echoing down the hotel corridor,” David says. “Again the couple wouldn’t answer door to security or TUI rep.”

So when David and his partner saw the couple in the hallway later that day, they decided to say something themselves.

“My partner caught them as they left their room and said: ‘Would you mind keeping noise down.’”

That’s when the man lashed out at them.

Recalls David: “Bloke told us to mind our own business and girl started mouthing off and told us to shut up – my partner told her she was the one that needed to shut up and shut door.”

“Bloke tried to physically kick door down saying: ‘F*cking come out here you p*ssy boy f*ggot, you don’t speak to my wife like that.’”

“I called reception immediately and they already had a room ready to move us into due to the previous complaints.”

The next morning, David and his partner ran into the couple at breakfast.

“Bloke walked up to my partner as we were eating breakfast in the restaurant, shoved table into him, then spat in my partner’s face and said: ‘You two are an abomination against the Bible.’”

When David complained to a staff member about this, the person told him “guests were allowed ‘one strike’ before action is taken.” When he called the police to see about filing a report against the man, he was told law enforcement didn’t “count spitting in someone’s face as assault.”

That’s when David and his partner packed their things and checked into a different hotel.

TUI says it has reviewed the reports as well as surveillance footage of the spitting incident and that the “correct procedures had taken place in resort with our guidelines for situations like this.”

“The guests in question were given a warning and should anything have escalated any further, then the staff would have taken the next step,” a representative tells Pink News, adding that the company is “very sorry” that David and his partner didn’t have an enjoyable time on their vacation.

But this isn’t the first time TUI has been accused of not taking the needs of their LGBTQ guests seriously.

Last month, a young gay couple tweeted that they were on a TUI cruise in South East Asia for their Honeymoon when they suffered homophobic abuse from TUI staff members, including being ignored by waitstaff and laughed at when they danced together.