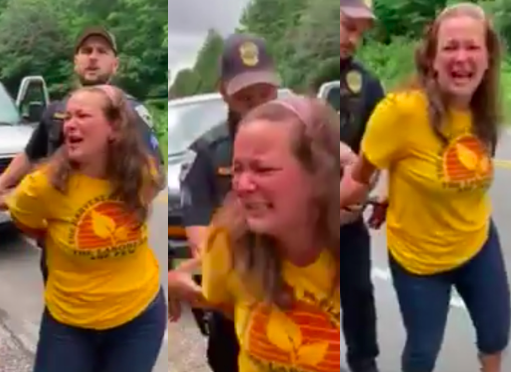 Rochelle Kelley is a Trump-loving anti-masker and member of the Weare School Board in New Hampshire who made headlines last month when video of her shouting homophobic slurs at a police officer went viral on social media.

“Let go of me, you piece of sh*t!” she could be heard screaming at the top of her lungs while resisting arrest during a July 25 traffic stop. “F*ck you, you f*ggot!” Then she told the officer to “eat sh*t, you c*ck-sucking d*ck” before threatening to “sue the sh*t out of you!”

Now, in a crazy new interview with her local newspaper, the 33-year-old stay-at-home mom is talking about that incident, which resulted in her being charged with obstruction of government administration and resisting arrest, as well as how she was recently cleared of disorderly conduct charges connected to a different case involving a confrontation she had with officers back in April 2020.

“I received endless amounts of death threats,” Kelley says. “DCYF (Division for Children, Youth and Families) was called on me. All kinds of things. But that’s expected when you’re on the right side of history. And it didn’t stop just because I was found not guilty. It’s still going crazy.”

Kelley says the people who are targeting her are mostly “just super liberal and don’t believe in freedom.”

“They believe masks are for the greater good, if you don’t do it you’re killing grandma! They don’t believe in real science! They believe in mainstream media!” she says. “Anything the news tells them, they believe!”

As for throwing a homophobic meltdown during a traffic stop, Kelley says people only saw a short snippet of what was actually a three-and-a-half hour altercation with officers and that she fully expects to be cleared of all charges since the cops violated search and seizure protections under the Fourth Amendment.

“We declined an inventory, which shouldn’t be legal to begin with,” she said. “[The officer] did it anyway and arrested me because I said ‘no.'”

Shortly after the video went viral, Kelley was censured for her antigay remarks by the Weare School Board. During the meeting, School Board Chairwoman Wendy Curry said the board couldn’t oust her and so it was the only way to show “that homophobic statements to police officers is not an acceptable school board thing.”

Relive Kelley’s psychotic homophobic meltdown from July 25 below. Or don’t.

Weare school board member Rochelle Kelley is unhappy after being cited for a motor vehicle inspection violation. Next week, she goes on trial for criminal mischief & disorderly conduct after defying police orders to leave a Concord playground closed for Covid. #NHPolitics pic.twitter.com/lMUbHuvjU9