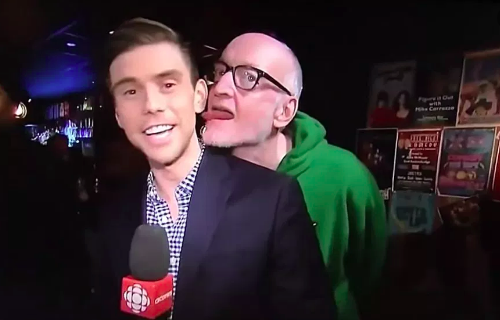 Chris Glover is an the out gay reporter for Canada’s CBC. This week, he filed a police report after having his ear licked by comedian Boyd Banks during a live broadcast.

Glover was at Comedy Bar in Toronto reporting on the event when Banks crept up behind him, nuzzled his shoulder, and began licking his ear in a sexual manner.

“Things are getting a little awkward out here,” he said during the broadcast, “so I’m going to pass it back to you, Dwight.”

CBC released a statement about the matter, saying:

While some observers argued the actions amounted to an assault or sexual assault, Glover told The Canadian Press he would leave it up to police to make that determination. What’s certain, he said, was how the incident made him feel. “I, as a journalist, was just trying to do my job,” Glover said. “I feel deeply disturbed by what happened. I still feel like it was completely uncalled for. The whole thing just really made me feel really awkward and uncomfortable and embarrassed.”

Meanwhile, Banks has issued an apology, taking complete responsibility and calling himself an “idiot” for what he did.

“There is no excuse for my behavior last night,” he said. “I’m guilty of everything. I am an idiot. I want to apologize to the standup community in Canada and of course the reporter, who was doing his job.”